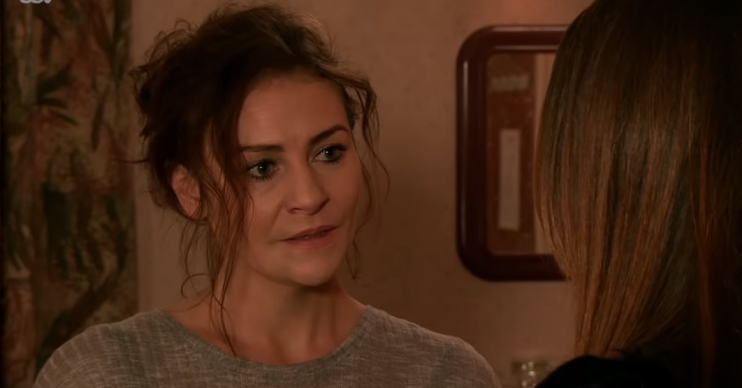 The actress has been at the centre of a cheating storyline and recently both Vicky and Michelle Connor teamed up to get revenge on their ex-fiancé Robert Preston.

However the soap star had to take a break from online social platforms due to abuse she had been receiving.

The actress spoke to Sunday Life about her decision to spend time aware from social media.

She said: “I’ve been tending not to go on social media lately because I don’t have the temperment to deal with people who are being cruel because they can.

“I’m quite fiery and don’t have the temper for it.

“But my mum is great, she’s on all the time and has started showing me all the nice things people are saying because you get it into your head the public don’t like you but that isn’t the case, they actually do seem to like me.

“It’s always nice to hear that because it’s easier for people to slate you rather than salute you.”

However the chef dumped her in order to get back with Michelle before she had a chance to tell him about her pregnancy.

When he found out she was carrying his child, he opted not to tell Michelle the truth and they got engaged; meanwhile Vicky and Robert continued their relationship.

Robert eventually proposed to Vicky as well, but a couple of weeks ago, Michelle discovered the truth.

Despite Robert trying to cover his tracks saying he had a one-night stand with Vicky, Michelle learnt from her rival that Robert had lied once again and was engaged to the both of them.

Michelle and Vicky got their revenge on Robert by getting his business, The Bistro, into Michelle’s name and they attempted to set him up for murdering Vicky.

But while Vicky was hiding in a hotel, she went into labour with her baby and Michelle had to deliver the child.

Worrying something may happen to Vicky or the baby, Michelle called paramedics and the police discovered Vicky was alive.

Robert was eventually released, but didn’t get to see Vicky or his child as she had fled with their new son, who she named Sonny.

Is this the last we’ve seen of her? We hope not!