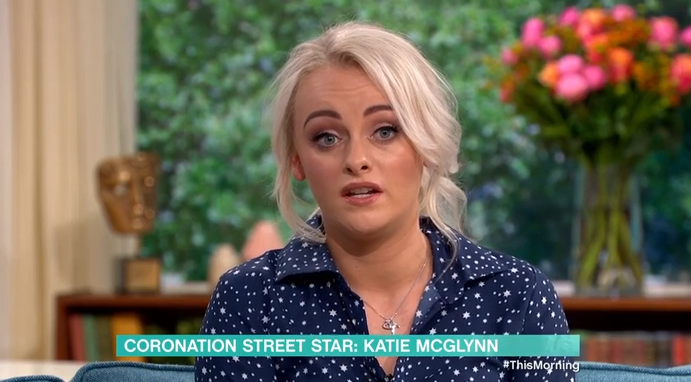 It's going to be too sad

Katie McGlynn has revealed that she’s warned her mum not to watch her final Coronation Street scenes.

Speaking to Holly Willoughby and Phillip Schofield on today’s This Morning (Tuesday September 10), Katie opened up about Sinead’s heartbreaking exit.

The newlywed discovered a lump on her neck last night (Monday September 9) during her wedding to Daniel Osbourne.

On Wednesday (September 11) the young couple will be given the devastating news Sinead’s cancer has spread to her lymph nodes and liver and she only has months to live.

The actress appeared on the This Morning sofa and told the hosts: “It’s just heartbreaking, but it is real life for a lot of people.”

And she went on to say she’s told her mum not to watch it!

The actress then realised she shouldn’t put people off and quickly added: “Obviously I want people to watch it, but it’s so sad.

“Please watch it and please go for a smear test.”

She revealed that now she has finished filming she plans to do “normal stuff” like go to the gym and go on holiday, as well as getting into music and watching telly.

But even Katie will struggle to watch her exit scenes, despite the fact she filmed them and knows exactly what’s coming.

“I don’t even want to watch what we’ve filmed now,” she said.

“I don’t really cry as a person usually, and then we were doing one of the penultimate scenes, a lot of heartbreaking stuff, and this scene was Sinead’s last dialogue.

“I was just sat there, because we have a laugh on set because you have to try and have a balance, so we just sat there reading through it and I just started crying.

“I said: ‘I’m sorry I can’t do this, this is really sad’, because Sinead’s such a nice person. But it’s always the nice people, isn’t it?”

Sinead’s final scenes are set to air this autumn and she revealed on Sunday she had finished filming.

Spoilers for next week show Sinead visiting a hospice and making the huge decision to give up chemotherapy as it’s making her so ill and meaning she can’t spend the time she has left with her son, Bertie.

Reports have suggested Sinead’s husband Daniel will spiral out of control after her death.

He’s set to overdose on alochol and possibly take his own life as he struggles to cope with his grief.