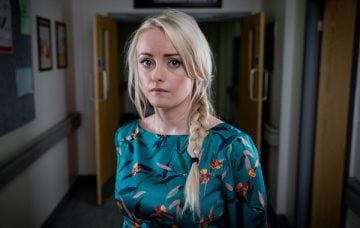 Actress Katie McGlynn has posted a tribute to her Coronation Street character Sinead Tinker as her death has been confirmed.

Katie, who joined the Corrie cast in 2013, posted the tribute to her Instagram page.

Katie wrote: “After nearly 7 wonderful years playing Sinead Tinker, my time on the cobbles is coming to an end. I feel so privileged & honoured to have been part of @coronationstreet.

“I’ve honestly enjoyed every since second working alongside a BRILLIANT cast and crew who go above and beyond to make Corrie the amazing show that it is, I’m going to miss everyone so much.”

Katie then added: “I’m sad to be leaving Sinead behind, but I felt the time was right for me to spread my wings and pursue other opportunities.

“As a team we felt Sinead’s ending on the show should highlight the importance of cervical cancer screenings – and the women NEED to go for their smear tests.

“Also, to highlight the issues women face when affected by cancer in or around pregnancy @mummys.star.

“Everyone has been working so hard on this storyline and I just hope I do Sinead, the show and the thousands of women out there who have been in Sinead’s position, justice.

“Sinead Tinker might be leaving Coronation Street, but I’ll carry a piece of her quirkiness with me forever. #Corrie #SineadTinker #CancerandPregnancy #CervicalCancer.”

After Bertie was born, Sinead went on to have treatment and just a few weeks ago she was told her tumour had shrunk and showed no signs of spreading.

Next week Sinead will discover a lump on her neck as she prepares to officially marry Daniel Osborne.

After going to the hospital for a scan, Daniel and Sinead try and put on a brave face and start to organise a mini moon to take their minds off what is happening.

But before they can even get anything booked the hospital has called and asked them to come back in immediately.

The new Mr and Mrs Osbourne are delivered the worst possible news as the doctor reveals that not only is Sinead’s cancer back, but that it has spread to her lymph nodes and she only has three or four months to live.