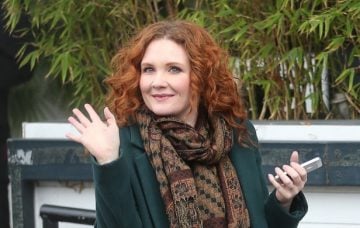 She's named her about a Weatherfield legend

Jennie McAlpine has welcomed her second child into the world, a baby girl named Hilda, with her husband Chris Farr.

The thrilled Coronation Street star has shared the gorgeous news with her fans on Twitter.

And a few famous faces have already taken to the comments to congratulate her on the happy news.

Jane Danson – who stars alongside Jennie as Leanne Battersby in the ITV soap – wrote: “Congratulations to you all. Sending lots of love (sic)”

Andy Moss – who has appeared in two episodes of Corrie, but is mostly known for playing Rhys Ashworth in Hollyoaks and Paul Cuthbert in Doctors – added: “Super cute !!!! Congrats you guys (sic)”

Meanwhile, it was recently revealed the soap’s production team had to reverse a car on the cobbles set in order to disguise Jennie’s burgeoning baby bump.

Jennie said: “We started [covering the bump] with a mug, and then a handbag. I kid you not, last week they hid it with a Ford Fiesta.

The actress also teased that Maureen Lipman’s character Evelyn Plummer will be heavily involved with Fiz’s exit storyline as she heads off for maternity leave, but she expects to return to Weatherfield after giving birth to her second child, because she is yet to find out that Fiz is getting bumped off.

She added: “So far, I haven’t read any scripts where I die.”

What do you think of the name Hilda? Leave us a comment on our Facebook page @EntertainmentDailyFix and let us know what you think!