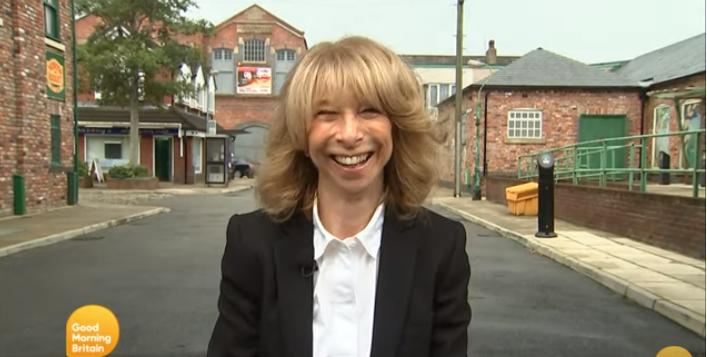 Will she be back?

Gail Rodwell may be missing from Coronation Street at the moment, but actress Helen Worth has let slip she is alive and well.

Speaking on Good Morning Britain today (Wednesday August 14) she updated summer hosts Kate Garraway and Richard Madeley and seemed to confirm Gail will be back.

Helen was appearing to discuss the progress of Black Rhino, Munu, who she has been helping to rescue and rehome.

Keen animal welfare campaigner Helen is now hoping to raise enough money to enable Munu to become a dad and protect the species.

After discussing Munu’s progress, talk turned to Helen’s Corrie character, who has been on the cobbles for 45 years, but has recently disappeared without telling her family where she is.

The last we saw of Gail she was boarding a flight to Thailand after her sons, Nick Tilsley and David Platt were in court for stealing grandmother Audrey’s £80k.

Everyone blamed Gail for the way her boys had turned out and she felt the family would be better off without her.

With no one on-screen knowing where she actually is, and viewers unsure if she’s still in Thailand, Kate asked if Helen could shed any light on the subject.

“Currently, Gail on Corrie is missing,” Kate said. “Could this be the end?”

Looking a bit flustered, Helen stuttered over the question before responding: “I’m not sure if I’m supposed to say.”

Richard went on to ask the actress if the lines between her and Gail ever blur given she’s been playing her for so long.

Do you want Gail to come back to Corrie? Leave us a comment on our Facebook page @EntertainmentDailyFix and let us know what you think!