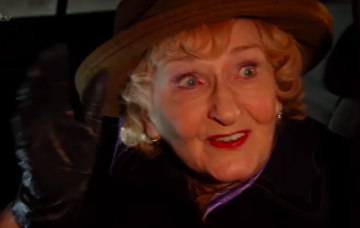 Coronation Street boss Iain Macleod has said he is in regular talks for Eileen Derbyshire to return.

Actress Eileen took a sabbatical in November 2015 after playing Emily Bishop since 1961.

On screen Emily was seen jetting off to far flung Peru to work with charities and her nephew Spider, and though she has been mentioned on and off, she hasn’t been seen since.

Iain told press yesterday: “As for Emily, we’re in talks fairly regularly with Eileen but at the moment there’s no plans for her to return but again the door’s certainly not closed there.”

Fans have repeatedly called for her return after her abrupt exit, with some scared she would never comeback.

Her exit in 2015 was originally meant to last six months, however it was later extended with show bosses giving Eileen however much time she wanted off for her well-deserved break.

However, while Emily’s return is still up in the air – her former lodger Norris Cole will return for a short appearance this month.

Malcolm Hebden was forced to take a break from the soap after suffering a heart attack.

He will soon be seen returning to sell his house in a flying visit to the cobbles, but soap boss Iain has confirmed both he and Malcolm want Norris back for good.

He said: “Definitely in Norris’s case, the hope on my part and, I think on his, is that we can bring him back in for good.”

Iain added: “One hundred percent Norris is not leaving the show.

Do you want to see Emily back on the cobbles? Leave us a comment on our Facebook page @EntertainmentDailyFix and let us know what you think!