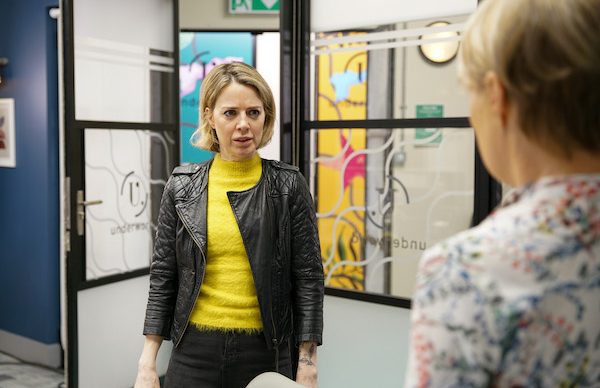 Will she end up back inside?

Currently, Abi is in a relationship with Ray (Mark Frost), however, once his true colours are exposed online by Bethany Platt, she is set to take revenge.

In this week’s episodes, Bethany Platt (Lucy Fallon) posts an article online which exposes the full extent of Ray’s mistreatment of women and sleazy behaviour.

After seeing the article, Abi pretends to be okay with Ray’s behaviour, but afterwards she ends up becoming angry and stealing his car before setting it alight on the evening of a charity gala that they attend together.

Next week however, Abi begins to regret her actions as Ray calls her and warns her that he has reported her to the police.

Kevin Webster (Michael Le Vell) advises her to quickly come up with an alibi to protect herself.

Abi asks her best friend Sally Metcalfe (Sally Dynevor) to lie for her and say that they were together. However, Sally isn’t keen to get involved, and as a result, it is Kevin who is forced to step in and take a risk to protect Abi.

Sally Carman, who plays troubled Abi, said: “When Abi invests in someone and she’s then let down or hurt, she comes out fighting. Instead of getting upset, she gets angry because that’s her survival tack. That’s how she’s had to be her whole life.”

She continued: “So she’s furious with Ray. She really thought she might have found a good one. He was charming, fun and treated her really well. He didn’t seem to mind about her past, he ticked all the boxes, but then he turned out to be a sex pest which rained on her parade.”

When discussing Abi’s search for an Alibi, Sally said: “That actually turned into quite a funny scene, with Abi behaving like a child and Sally playing the mum.”

She continued: “Abi’s a bit in denial and tried to soften what she’s done, but Sally sees straight through it. She can’t understand why Abi would take such a risk and put herself back.

“Sally won’t give her the alibi, but when she explains it to Kevin, absolutely not asking him to do anything, he mulls it over and takes it into his own hands.”

Abi can’t believe that Kevin would do something like that for her, Sally went on to say: “She’s really fond of Kevin.

“Before New Year she thought that could have been a relationship, but then Ray happened. However, she’s reminded again that Kevin’s solid, dependable, he’s a real friend and he’s done more for her than any man ever has. It definitely starts to change her feelings towards him.”

After Kevin steps up to help her, Abi believes that it’s all going to be alright. However, vengeful Ray sees Abi looking loved up with Kevin at the Rovers Return and announces that new evidence has come to light.

When Abi hears this, Sally says: “Abi is very worried at that point because she knows she’s done it. As much as she suggests Ray is bluffing, she’s actually panicking big time.”

Will Abi get caught, and if she does, what will happen to Kevin?

Leave us a comment on our Facebook page @EntertainmentDailyFix and tell us whether you think Kevin has made a mistake protecting Abi.