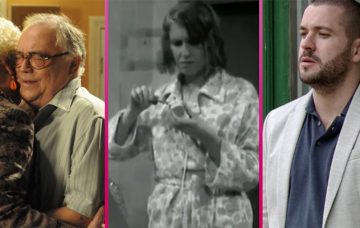 From the heartbreaking to the dramatic

Soaps are known for showing the circle of life – births and deaths – and Coronation Street has certainly had it’s fair share of dramatic deaths in its time.

In fact, if it were a real place, no one would dare set foot in Weatherfield for fear of losing their life.

From sad, emotional and moving passings, to dramatic and iconic comeuppances, what have been the most memorable deaths in Corrie history?

The first wife of Ken Barlow (William Roache), Valerie (Anne Reid) died in quite a dramatic way in 1971.

Ken had been offered a teaching position in Jamaica and as the Barlows planned to emigrate, a going-away party was thrown for them in the Rovers the night before.

Ken went over early and left Valerie getting ready at home. She tried to fix a faulty plug on her hairdryer with a potato peeler and when she plugged it in, it gave her an electric shock, killing her instantly.

As she fell to the ground, she pulled down a portable heater that caught fire and burned the house down.

Alan Bradley (Mark Eden) was one of the Street’s most iconic villains.

He charmed Rita Tanner (Barbara Knox), but was just after her for her money, then when she found out he assaulted her, but walked free from court and was able to start a campaign of harassment against her.

Terrified, Rita moved to Blackpool and changed her name, but Alan tracked her down and in one of the most famous deaths in Corrie history, he was hit by a tram as he chased her across the tracks.

Richard Hillman (Brian Capron) was the third husband of Gail Rodwell (Helen Worth), but behind his successful businessman and kind family man exterior was a serial killer.

When Gail found out, Richard kidnapped her and her kids Sarah Platt (Tina O’Brien) and David Platt (Jack P Shepherd) and planned to kill them all and himself.

He tied them up in a car and drove them into the canal to drown them. He died, but the Platts thankfully survived.

Soap icon Vera Duckworth’s (Liz Dawn) death was moving and far less dramatic than her life had been.

After telling her husband Jack (Bill Tarmey) she loved him and asking him to say it back, he went off to the Rovers for a drink while she rested in a chair.

When Jack returned Vera had passed away.

There wasn’t a dry eye in Britain as Jack calmly kept her warm and waited for the paramedics, who told him Vera had died of heart failure and hadn’t felt any pain.

Almost three years after his beloved Vera passed away, Jack died too.

Jack was diagnosed with non-Hodgkin lymphoma and given weeks to live. He slipped out of his 74th birthday party at the Rovers, said goodbye to his friends and returned home.

Putting on a Matt Munro record, Jack passed away in his armchair as the ghost of Vera joined him and they shared a dance and a kiss, reunited at last, and leaving the nation in even more tears than in 2008.

If Jack and Vera’s deaths were emotional, they were nothing compared to the passing of Hayley Cropper (Julie Hesmondhalgh).

Hayley had been diagnosed with terminal pancreatic cancer and with only weeks left had decided she wanted to take her own life.

Husband Roy (David Neilson) was heartbroken, but helped her to bed and made her comfortable. She insisted he wasn’t to touch the glass with the lethal cocktail in it so he wouldn’t get in trouble.

Hayley drank the drink and died in Roy’s arms. Anna Windass (Debbie Rush) who had shut the cafe downstairs and sat in the dark, knowing something wasn’t right, and Carla Connor (Alison King) then arrived to find Hayley passed and Roy distraught.

Tina McIntyre (Michelle Keegan) was bludgeoned to death by Rob Donovan (Marc Baylis) with an iron bar after she threatened to expose his dodgy dealings.

At first they’d argued on the balcony of the builders’ yard and during a struggle Tina fell over the edge. But when she survived and told Rob she’d tell the police he pushed her deliberately, he decided to finish the job and attacked her with the pole.

She was found and taken to hospital, where she died of her injuries.

Rob let Peter Barlow (Chris Gascoyne) take the blame for her murder, even letting him go to prison, but when Rob confessed to sister Carla the night before his wedding to Tracy Barlow (Kate Ford) it sparked a series of events that saw him eventually punished for the crime.

Evil drug dealer Callum Logan (Sean Ward) was the ex of Kylie Platt (Paula Lane) and when he arrived back on the scene he got her hooked on drugs again.

He then tried to stake his claim to their son, Max, and started terrorising the family. Sarah Platt got involved with him, thinking everyone else was wrong, but when she saw his true colours she began to panic.

When Callum needed money and started threatening the Platts for it, they set him up trying to record him confessing to his crimes, but he caught onto what they were doing and attacked Sarah.

In a live segment, Kylie hit Callum over the head with a wrench just as he was about to rape Sarah. They then buried his body in Gail’s granny annex. The murder was eventually pinned on Tony Stewart (Terence Maynard).

After murdering Callum, Kylie was eaten up by guilt. After months of dealing with it, she told David she couldn’t bring her kids up in the house she killed Callum in and they needed to leave Weatherfield for good.

As they planned to go to Barbados to live with her sister Becky (Katherine Kelly), Kylie found herself playing the Good Samaritan when she saw Gemma Winter (Dolly-Rose Campbell) being hassled by Callum’s old cronies Clayton Hibbs (Callum Harrison) and Macca (Gareth Berliner).

She rushed over to help and Clayton stabbed her. She bled to death in David’s arms on the cobbles.

After three years on the Street, Aidan Connor (Shayne Ward) took his own life in what was a moving, emotional and devastating plot.

He’d recently donated a kidney to half-sister Carla and viewers had speculated something wasn’t quite right then. But his depression was largely hidden and didn’t come out until after he’d gone.

The soap worked with charities CALM and The Samaritans and the suicide was never shown on screen.

The heartbreaking episode after Aidan’s death where dad, Johnny Connor (Richard Hawley) discovered his body, won huge praise, most notably for Gail’s haunting monologue that played over a montage of Aidan’s friends and family receiving the news of his death.

The mighty Pat Phelan (Connor McIntyre) and his reign of terror was brought to an end in June last year when Anna Windass (Debbie Rush) returned to kill him.

Phelan had done some despicable things in his time on the cobbles – raped Anna, conned most of the Street out of their savings, left Michael Rodwell (Les Dennis) to die, held Andy Carver (Oliver Farnworth) prisoner, murdered Andy after getting him to kill Vinny Ashford (Ian Kelsey) and then murdered Luke Britton (Dean Fagan) to boot.

Everyone thought he was dead after wife Eileen Grimshaw (Sue Cleaver) pushed him into the Irish sea, but he returned and after shooting his pregnant daughter Nicola Rubenstein (Nicola Thorp) he took everyone in the Bistro hostage, shot Michelle Connor (Kym Marsh) and finally met his maker for real when Anna returned out of the shadows and plunged a knife into him.

What do you think has been the most memorable Corrie death? Leave us a comment on our Facebook page @EntertainmentDailyFix and let us know what you think!