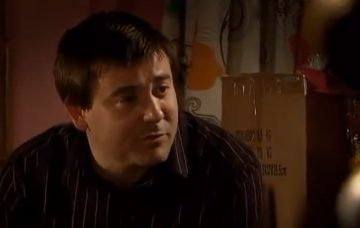 A Coronation Street writer has revealed the show never planned to turn John Stape into a crazed killer.

The evil former cobbles resident – who was played by Graeme Hawley – couldn’t help but bump people off in Weatherfield during the actor’s four-year stint on the soap.

And now former Corrie scribe Damon Alexis-Rochefort has revealed the storyliners only turned him into a killer by “accident”.

Read more: Audrey Roberts robbed of everything – by her grandson?

He said: “I enjoyed the wackiness of the John Stape storyline too, which – unusually – we didn’t plan long term at the beginning but built month by month at story conference.

“All he wanted to do was teach, and he ended up in the most ridiculous situations where he ended up killing people by mistake.”

John has gone down in Corrie history after he murdered Charlotte Hoyle (Becky Hindley) with a hammer, covered up Colin Fishwick’s (David Crellin) death from a heart attack before stealing his identity, and accidentally killed Colin’s mother Joy Fishwick (Doreen Mantle).

This all came after he had an affair with pupil Rosie Webster (Helen Flanagan) and then kidnapped her and held her prisoner.

Damon penned more than 200 Coronation Street episodes before departing the cobbles, and as well as writing the eulogy for Maggie Jones’ alter-ego Blanche Hunt, he was asked by Bill Roache (Ken Barlow) to write the eulogy for the late actress’ real funeral following her death aged 75 in 2009.

He added to Wales Online: “I always loved writing Blanche, she was one of my favourite characters, she could say all the things that no-one could say.

“And when Maggie Jones died I was very, very honoured to write the episode of her funeral. And then I was even more honoured when Bill Roache asked me to write the eulogy for her actual funeral, and I met a lot of her old friends from the theatre. Things like that are a great honour.

“Being able to write a eulogy for one of your favourite actresses and then have it read out by Bill Roache at Salford Cathedral is pretty amazing.”