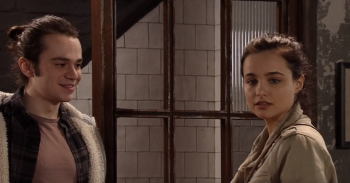 She first appeared in April

Fans of Coronation Street viewers want nail technician Alina Pop to stay on the cobbles for longer than her storyline.

Alina, played by Ruxandra Porojnicu, first appeared in April after Seb took a shine to her when he was asked to do a job at a nail bar.

He fell for Alina but it soon became clear that something wasn’t right as Alina kept worrying about what her boss Rachel would think.

Alina also revealed that Rachel was her landlord and didn’t want to do anything that would upset her.

Back when Seb and Alina first met, Alina ran off after seeing builder Jan on the street with Eileen.

But last week, it was revealed that Seb’s housemate Jan knows Alina when he popped into the nail bar and told her not to contact Seb as it was too dangerous.

Whilst some people believe Jan is dangerous and involved with people trafficking, others think he could be an undercover police officer.

Although it has not been confirmed what will happen to Alina after this storyline, viewers are already wanting her to stick around.

In a Digital Spy forum started in April one viewer wrote: “Is anyone else really liking Alina so far? She seems a very nice girl and I thought her scenes with Seb tonight were really sweet.

“I hope she stays for a while. She could make a good friend for Emma.”

In the forum over the past few months viewers have agreed.

One wrote: “Agreed, another great addition to the street.”

Another put: “She does seem like a really lovely girl, but obviously for those of us who have read spoilers we know where this is going. I would like her to stick around long term.”

“Sure he has his faults, but he has his good points too especially given his upbringing!

“A sweet but strong-willed young lady like Alina could be exactly what he needs to help him grow up into a decent family man and deal with his previous anger issues.”

Would you like to see Alina be a permanent character? Leave us a comment on our Facebook page @EntertainmentDailyFix and let us know what you think!