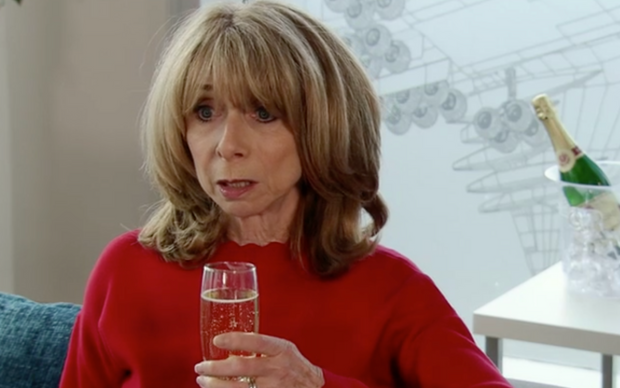 Coronation Street viewers predict Gail will return from Bangkok with another new husband!

Coronation Street veteran Gail Rodwell has escaped Weatherfield for some sea, sand and yoga – but viewers predict she’ll return with more than just a tan.

On Monday (July 8), Gail sneaked to the airport intent on boarding a flight to Bangkok, after a dramatic fallout with her family.

Viewers know that her sons Nick Tilsley and David Platt are both on remand in prison thanks to their meddling mum, while Audrey fell out with her daughter after she abandoned her at the hospital.

Gail’s attempt to bring the family together resulted in both sons breaking their bail conditions, leading to them being put behind bars.

Horrified by the state her family was in, Gail disappeared, leaving her concerned daughter Sarah to find the dinner burning in the oven and no sign of her mum.

Gail was then seen sipping Champagne in the departure lounge at Manchester airport, before boarding a plane bound for Bangkok, saying: “This is the first day of the rest of my life…”

While some viewers pondered whether Gail (played by Helen Worth) will ever come back, others predicted she would be back – and with a new husband in tow!

Posting on Digital Spy Forums, one fan wrote: “Gail will probably bring home a new husband that looks like Norman Bates with a briefcase.”

Another agreed, saying: “Gail will return with a new husband who needs a visa, who will die so Audrey or one of the kids can get a new kidney or heart. Or she’ll return with millions in cash as her millionaire husband drowned on honeymoon when he jet skied naked behind one of the three yachts he owned.”

A third added: “Or she may not be actually married, just enamoured and living with him until it all goes wrong. Gail has been married so many times already! I’d like to see her have some fun though.”

Over on Twitter, one amused viewer wrote: “Gail off to Bangkok to see the lady boys. Her last hope in a husband.”

Another joked she was going there for a “mail order groom”.

Others viewers didn’t see the funny side, slamming the storyline as unrealistic.

Some, however, begged Corrie to film a spin-off series following Gail’s exploits in the Thai capital!

In fact, actress Helen is on a  summer break and will be back on the cobbles soon.

Perhaps, if she does return with a new fella, he should get some life insurance?

Do you think Gail will return with a new husband? Leave us a comment on our Facebook page @EntertainmentDailyFix and let us know what you think!