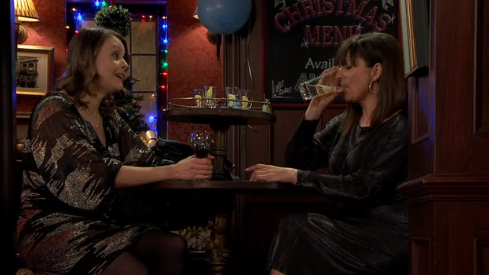 Tracy is married to Steve McDonald

Viewers of Coronation Street were loving the new pairing of Tracy McDonald and Paula Martin.

In last night’s episode of the ITV soap (December 31 2019) Tracy was excited as she had tickets to go and see Evanescence with her husband Steve.

But Steve told Tracy that Tim was sick and he needed to work, when in reality Steve had offered to swap shifts with him to avoid going out.

Tracy soon found out her husband had been lying and confronted him.

Furious, she stormed off to the pub where she ran into solicitor Paula.

The pair sat down and had a few drinks together, sharing their woes.

While Tracy complained about Steve, Paula told her about her ex-girlfriend, Sophie’s new girlfriend, who she had been stalking on social media.

Together the pair decided to make it a New Year’s Eve to remember.

Later, Paula told Tracy she had a lot going for her and needed to throw caution to the wind.

Viewers loved the scenes between the pair and are already ‘shipping’ them.

Safe to say I'm down for Tracy & Paula now I know she and Sophie aren't together (don't talk to me about that. I'm mad. Mad but not surprised). #Corrie

#Corrie am I the only one who is feeling this Paula/Tracy thing?

Tracy and Paula actually have…more chemistry than I expected. #Corrie

tracy and paula have such a good dynamic, it’ll be such a wasted opportunity if they don’t get together #corrie

In tonight’s episode (January 1 2020), Tracy wakes up in a strange bed and races home before Steve finds out.

Has Tracy slept with Paula?