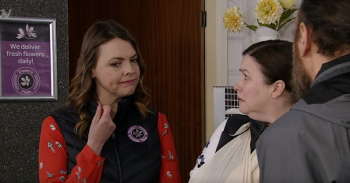 Coronation Street viewers gobsmacked at the price of Tracy’s flowers

Jan came in to buy some flowers for Mary

It turns out buying a bouquet in Preston’s Petals is pretty pricey!

Although apologising continuously and offering to buy her a drink, the florist refused and was not happy that the builder had left her hurt.

Jan decided to up his apology game last night and went into Tracy’s shop to buy Mary the biggest bouquet.

Mary emerged from the store’s back room and was clearly still upset with Jan.

Tracy told her friend to let him buy her the flowers whilst rubbing her fingers together.

She pointed to a bouquet on the counter and said “That’s a really nice bouquet and it’s a bargain. Only 46 quid.”

Jan paid for the flowers and gave them to Mary which soon put a smile on her face.

However, viewers were left shocked at the price of the blooms.

46 quid for an ugly bunch of flowers #corrie

Bloody hell! How does Tracey stay in business charging £46 for that bouquet? Not to mention the charming customer service! 🙄#Corrie #PrestonsPetals 💐😅

I’m watching on catch up. Who on earth goes to a back street florist to pay £46 quid for a bunch of flowers? #Corrie

After Jan left Tracy turned to Mary and said “Hey, what a result, we can sell them again” going to grab them. However, Mary swatted her hand away.

Mary seemed smitten with Jan following her bunch of flowres. And when Tracy overheard a conversation between Jan and Moira she reported back to Mary that Jan liked her back – but has she got the wrong end of the stick?

Jan first appeared on the cobbles last month after being hired by builder Gary Windass for a job.

Upon his arrival, he made a good impression with Eileen Grimshaw and recently moved into her house as a new lodger.

Although Jan seems charming, fans don’t quite trust him after Seb’s new girlfriend Alina saw Jan and ran off leading viewers to wonder if he’s hiding something.