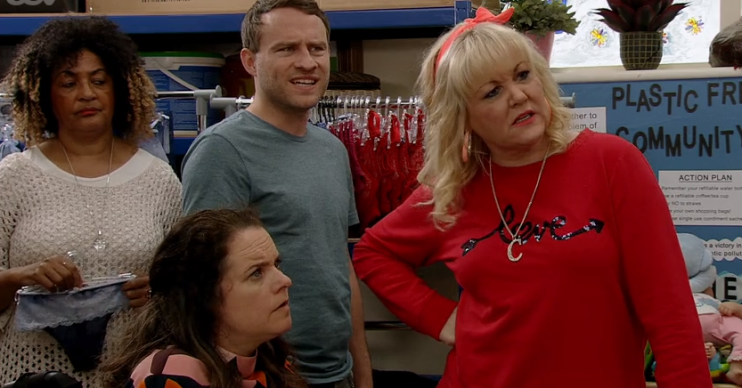 Viewers of Coronation Street are getting fed up with the ‘horrible’ Underworld workers.

The staff are currently working in the Community Centre after the factory roof collapsed back in March.

The accident put Sally Metcalfe in hospital and killed Rana Habeeb on her wedding day to Kate Connor.

Factory owner Carla Connor was left flooded with guilt as she knew the factory roof needed work done on it, but had no idea it was dangerous to the point it would collapse.

The businesswoman’s mental health began to deteriorate, believing she was responsible for the death of her sister’s fiancée.

Although Carla was given medication, she wasn’t actually taking it and began having hallucinations.

Believing she was seeing her old friend Hayley, who passed away in 2014, Carla followed her up onto the fire escape where it was revealed she was having a vision of Rana.

After her partner Peter Barlow managed to get through to her, Carla was returned to hospital. She was soon found a place in a specialist care unit in Carlisle.

Carla returned home last night with Peter and his son Simon and went to the temporary factory where she received a very mixed reception.

As she walked in Beth said: “We heard you were back,” and Izzy told her: “I hope you’re not expecting a welcome home party.”

Sally stepped in to Carla’s defence and said: “I don’t know about you lot but I am certainly in no position to be judging her. Welcome back Mrs Connor.”

Beth then asked Sally if she had forgotten what Carla did and Paul added that she almost killed her. Beth then said: “She did kill Rana.”

Sean also jumped to her defence and said: “No she didn’t, the scumbag who sabotaged the roof killed Rana.” Beth then asked how he knew it wasn’t Carla and he said: “Because you can’t get up scaffolding in high heels.”

Sally then added she had known Carla for 12 years and she wouldn’t do something like that.

In a Digital Spy forum, Corrie viewers seem to be getting fed up with the “horrible” factory lot.

In the forum called “CS: the factory lot are so horrible” one viewer wrote: “I hate how horrible they all are, all they do is moan, threaten to leave, be hypocrites, don’t do any work and yet act like the bosses are lucky to have them.

“Sean, Izzy and Beth in a lot of tonight’s episode were awful. Beth criticised Carla when they shouldn’t have been in the factory in the first place when the roof collapsed and Izzy being rude to Nick about being the boss.

“He should have sacked her on the spot. The only factory people I like are Sally and Sarah. Kirk is okay in really small doses but the others are so awful and Fiz is likely to return soon too.”

Others agreed with the original post with one writing: “I really want someone to point out to them that they are partly responsible for Rana’s death. Them, Lolly and obviously Gary.

“Also can someone tell Beth to shut her pie hole. I’m so sick of hearing her moaning on.”

Another put: “I am so sick of scenes lately when Izzy just goes up to people and starts having a go at them. We’ve seen it with Gary, Sarah, Nick etc. and she’s coming across as very rude. Awful character.”

Another wrote: “They should be grateful to Carla if anything. Self-entitled lazy [bleeps]. Get work outside the Street!

“Factory is filled with characters who need the axe in one fell swoop.”

On Twitter, viewers were also getting annoyed with the factory workers’ behaviour, especially Beth and Izzy.

I really hate Beth she is selfish, unsympathetic, rude and disrespectful. She is every bad thing I hate in a person. #coronationstreet #corrie

Oh shut up Beth and change your jumper #corrie

I have no words for Izzy and Beth anymore #Corrie

Read More: Coronation Street star Daniel Brocklebank shares a picture with co-stars and pup Colin on a day out

Carla had actually gone to the factory to tell the workers she was going to give away her shares in Underworld to all of them.

Although Peter wasn’t keen on the idea, she was determined to do it and get a fresh start and not be involved with Underworld any longer.

Viewers know that Gary Windass is responsible for damaging the factory roof. He sabotaged it needing more work, but didn’t expect his actions to result in death.