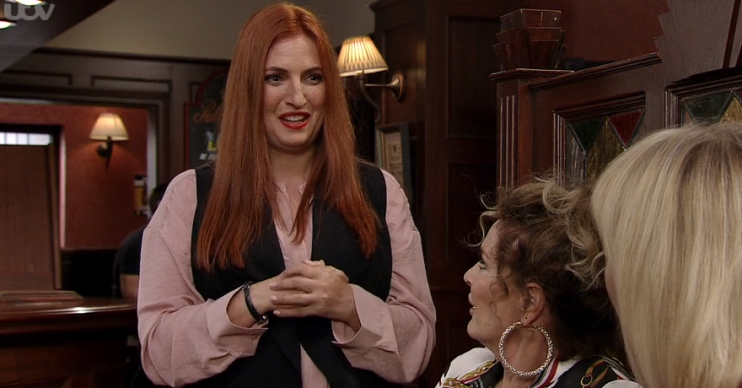 Some can't take to her OTT personality

Viewers of ITV’s Coronation Street have been left divided over Moira Pollock.

The Medical Centre manager has made multiple appearances throughout the show since her first in 2017.

In last night’s episode (July 17 2019), Moira was trying to get information out of Liz about Jan and Eileen’s relationship status.

Moira has had a crush on Jan for months now but he is not interested.

In the Rovers, Eileen wanted to keep her relationship with Jan a secret and when Moira asked her about them, she told him they were just friends.

It didn’t take Moira long before she began flirting with Jan hinting she wanted a date as she mentioned having an extra ticket to see the musical Wicked.

But Eileen soon butted in and told her that they were in a relationship, leaving Moira gutted.

Of course, that didn’t stop her on her quest for love…

Maria Connor, who was on a date with handsome Ben, ended up running out when his mother showed up and started criticising her.

Moira soon turned her attention to Ben and ended up having a sing along with his mother, who was also a fan of Wicked.

Ben’s mother wanted to invite Moira back for dinner but a frightened Ben quickly rushed him and his mum out of there.

Viewers have been left divided over Moira’s character. Some love her hilarious ways and want to see her more often.

I actually live Moira 😄😄 so funny and I’m in love with her hair! #CoronationStreet #Corrie

I would go to Wicked with Moira #Corrie

I think she's hilarious, and the kind of humour Corrie thrives with.

#Corrie Can we have more of Moira please, she is utterly hilarious?. Thanks in advance.

Moira doesn't get enough air time!!! Her character cracks me up when half the street are morose 😂 #Corrie #coronationstreet

But others are fed up with her and have called her ‘desperate’.

As much as I love Wicked, I just can't be doing with Moira. #Corrie

Oh god. I don't agree with axing characters but please get rid of moira. I can't bare her. She stinks of cringeness and desperacy. #Corrie

Why does Moira keep popping up? She’s as funny as developing piles #Corrie

Oh get a grip Moira #corrie