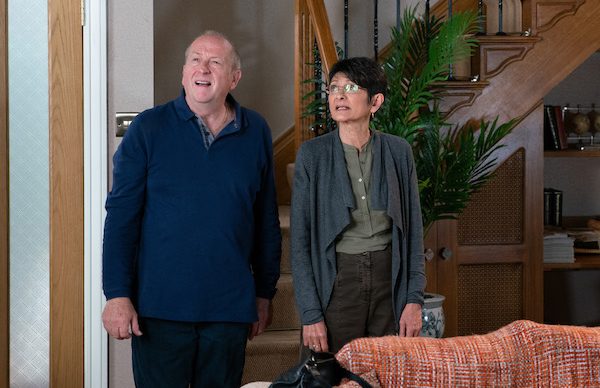 He installed cameras into her house!

Coronation Street viewers have been left disgusted as Geoff set up cameras to spy on his girlfriend Yasmeen.

For weeks, Yasmeen Nazir has been a victim of coercive control from her boyfriend Geoff Metcalfe.

Last week, Geoff became annoyed with Yasmeen and claimed she belittled and undermined him as he got worked up over a game of Bridge.

In last night’s episodes of Corrie (August 19 2019) Geoff and Yasmeen managed to make up over the falling out, but it didn’t last long…

Geoff revealed he had had cameras installed into Yasmeen’s home in order to keep her safe.

However, Yasmeen didn’t want cameras in her home and was upset when she realised Geoff had used the insurance money to pay for them.

The DJ was annoyed that Yasmeen didn’t like his gesture and even had the gall to say SHE wasn’t good for HIS mental health.

He took things a step further and ended his relationship with Yasmeen, deciding to move in with his son Tim and daughter-in-law Sally.

Before Geoff left, he seemingly took down all the cameras. However, when Tim went out, Geoff pulled out his laptop…

Viewers saw that Geoff hadn’t taken down all the cameras at all and had left one up in Yasmeen’s CD rack in order to spy on her.

If Geoff is this bad already. Robbing from Yasmeen, spying on her and keeping her away from her family, what's he gonna do next #Corrie

What a nasty piece of work Geoff is #corrie

Urgh Geoff what a creep #corrie

Geoff even went onto say to Tim that Yasmeen was the one who undermined him and treated him badly.

This isn’t the first time Geoff’s actions have shocked viewers.

A couple of weeks ago, he stole Yasmeen’s precious jewellery and sold them on. He even ripped up a photo of Yasmeen’s son Kal, who died in 2015.