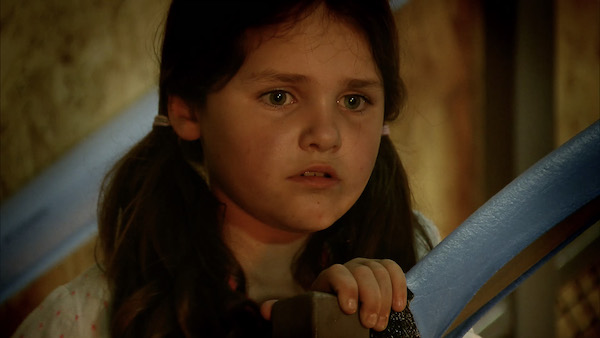 The little girl was sent to a school in Birmingham to help deal with her behaviour problems back in December last year.

Before she went viewers saw Hope’s behaviour getting worse resulting in her exclusion from Bessie Street Primary school for biting a teacher.

She also deliberately let Evelyn’s dog Cerberus go on a tram bound for Rochdale and refused to apologise to Evelyn who was furious.

Although Fiz and her daughter only returned last week she’s already causing trouble.

In Monday’s episode (September 2 2019) Hope ran away, scaring her mum and Tyrone.

As the police were called and they went out looking for Hope, she was on the factory building site.

Soon a fire broke out and the little girl began crying out for help. Luckily Ali saw the smoke and went in and managed to get her out safely.

But as the police questioned Hope on how the fire started, she said there were a group of people in there who started it.

However, at the end of the episode viewers saw that Hope had a lighter hidden in her doll, which she had at the building site – it was her who started the blaze.

Viewers are convinced Hope’s behaviour will get worse and she will become a serial killer.

Hope Stape is going to be a serial killer when she's older. #Corrie

Fans of the show know that Hope’s father John was a killer before his death.

The teacher went nuts after he had an affair with pupil Rosie Webster and later kidnapped her, holding her in his grandmother’s house for weeks.

He then accidentally killed former teacher colleague Colin Fishwick, who had been blackmailing him for stealing his identity.

John went on to murder Charlotte Hoyle, who was also blackmailing him. He covered up that killing by dumping her body on the site of the infamous tram crash.

He inadvertently claimed another victim as Colin’s mum, Joy, had a heart attack as he came clean about his crimes!

John died in 2011 in a car crash after his crimes were discovered.

Do you think that Hope will follow in her dad’s footsteps and develop a taste for blood?