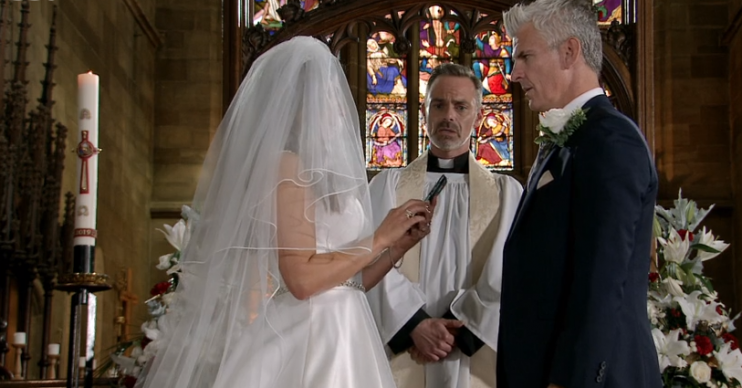 Viewers of Coronation Street cheered on Michelle Connor as she outed her fiancé Robert Preston as a cheater at their wedding.

Fans know Robert had been leading a double life, being engaged to both Michelle and Vicky Jefferies – who is pregnant with his baby.

However, when Michelle found out about Vicky, Robert lied to her saying he only had a one-night stand with her resulting in the pregnancy.

Michelle pretended to believe him, all-the-while plotting her revenge which included taking the Bistro from him and exposing him at their wedding.

And she definitely followed through with her plan in last night’s episode (December 4 2019) as she told their family and friends just what Robert had been up to in spectacular style.

As she started to say her vows, it soon became clear she didn’t plan on following through with the marriage.

She began quoting text messages Vicky had sent to Robert.

Carla passed Michelle a phone and she began reading out more texts from Vicky: “Why can’t you tell Michelle about us? We’ve been together for months.

“The stupid cow needs to get over you and move on. You said we’re going to be a family, you, me and Tyler.”

When Robert asked her to stop, she made sure to point out Robert replied to the texts.

Read More: FIRST LOOK: A dramatic lead up to Christmas in Coronation Street in 10 pictures

She said: “You replied: ‘I’ll tell Michelle when the time is right, she’s still fragile from the baby she lost and it would hurt her to know I was sleeping with another woman.

“But you know how I feel about you’.”

She then revealed Robert brought Vicky an engagement ring and that Vicky is seven months pregnant with Robert’s baby.

Viewers were ecstatic to see Michelle out Robert in front of their friends and family and cheered her on.

Aw I love Michelle for what she’s done. Such a strong woman #corrie #CoronationStreet

Michelle we feel for you! thats telling him 🤗😌#Corrie pic.twitter.com/SO6OCgmiO8

Kym Marsh will exit the show later this month and has revealed Michelle will sell the Bistro to arch-enemy, Ray.

She’ll then smash the place up before departing in a taxi.

Are you glad Michelle got her revenge? Leave us a comment on our Facebook page @EntertainmentDailyFix and let us know what you think!