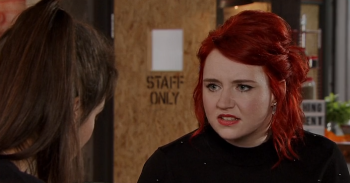 They hope she's not sticking around!

Coronation Street viewers have not taken a liking to new character Lolly.

The redhead was first seen a couple of weeks ago, introduced as Kate’s best friend from school. She had recently discovered her husband had been having an affair with her friend.

Lolly then appeared at the Bistro last night and began showing bride to be Kate some ideas for her wedding.

She went on to cause a bit of trouble when she booked a new wedding venue for the couple and was caught with vodka in Speed Daal leaving Rana unimpressed.

Viewers aren’t too chuffed with the newcomer either, branding her “annoying”.

Can Lolly just do one please? #Corrie

Go away Lolly! This is Kate & Rana's wedding day not yours #Corrie zz

Already not liking this Lolly character, lets hope she is in a few episodes and then does a disappearing act #CoronationStreet #Corrie

One tweeted: “Can Lolly just do one please? #Corrie”

A fourth put: “Go away Lolly! This is Kate & Rana’s wedding day not yours #Corrie zz” [sic]

Another wrote: “Already not liking this Lolly character, lets hope she is in a few episodes and then does a disappearing act #Coronation Street #Corrie

A couple of viewers have warmed to her, though…

One wrote: “So much love for Lolly tonight #corrie @KatAPearce” [sic]

A second put “I hope she is. She’s a Lolly. And a dolly. Full of jolly. All rhymes with Lolly.” [sic]

What do you think of Lolly? Leave us a comment on our Facebook page @EntertainmentDailyFix and let us know what you think.