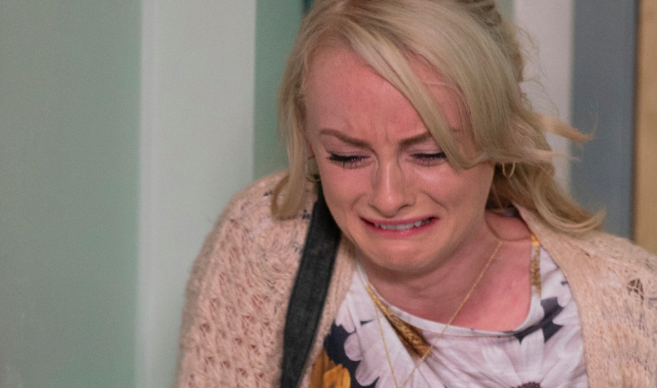 She has just months to live

In tonight’s scenes, the Underworld factory worker will make a momentous decision about what time she has left.

Weakened by chemotherapy, Daniel becomes concerned when Sinead doesn’t even have the strength to hold her baby son Bertie.

When he questions whether she should stop having the treatment, Sinead is horrified by the idea and angrily accuses him of wanting her to die quickly.

Worried she’s a burden, she lashes out in anger – leaving Daniel distraught and finding refuge in his work.

But, left alone and with Daniel’s words ringing in her ears, Sinead eventually makes a decision about her cancer treatment.

She decides to try one more round of chemotherapy but, if she is still feeling terribly sick, she will stop the treatment.

Although it’s making her feel ill, the chemo is supposed to lengthen her life expectancy, meaning she’ll have even less time left if she abandoned treatment.

Spoilers tell us that Daniel will hit rock bottom after Sinead’s death, even turning to alcohol to blot out the pain.

Actress Katie McGlynn has already filmed her final scenes, and enjoyed a goodbye party with her co-stars.

The soap star also added that her departure “was a mutual decision” to kill off her character and said she wanted to “pursue other opportunities” away from Corrie.