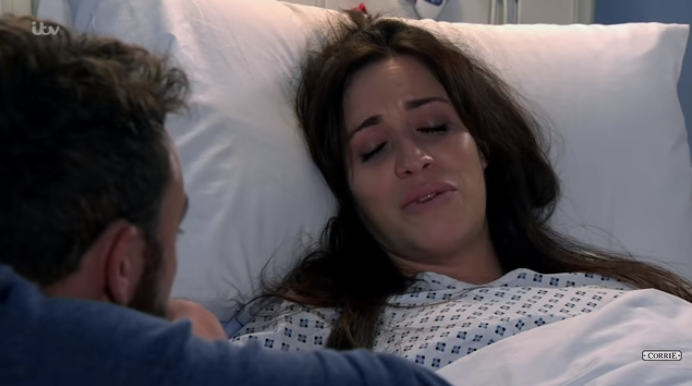 Coronation Street SPOILERS: Shona to die as she takes a turn for the worse?

It looks like the death toll could yet rise after Christmas Day’s bloodbath on Coronation Street.

For anyone in a food coma, when it aired, a brief recap: Derek Milligan went on a drunken shooting spree on the cobbles after Gary Windass ruined his life by kidnapping him and forcing him to miss his children at Christmas.

“Where’s Gary Windass?” he demanded to know repeatedly before pulling the gun out that he had stolen from Gary’s shop.

Forced into action, Gary tried to get Derek to give up the gun and let everyone go.

Turning around, Derek fired the gun through the window of the Rovers not realising Robert Preston was about to walk through it.

In the struggle Gary knocked Derek off the Helter Skelter and he plunged to his death on the cobbles.

Shona was then rushed to hospital where she would need an operation. She was sitting up and talking to David so at this point there didn’t seem much to fear.

However, Shona’s life could still be in danger as in the Boxing Day episode she takes a turn for the worse.

She suddenly collapses in David’s arms as she is talking to him and the family.

Could David see history repeating itself, with the violent death of another wife?