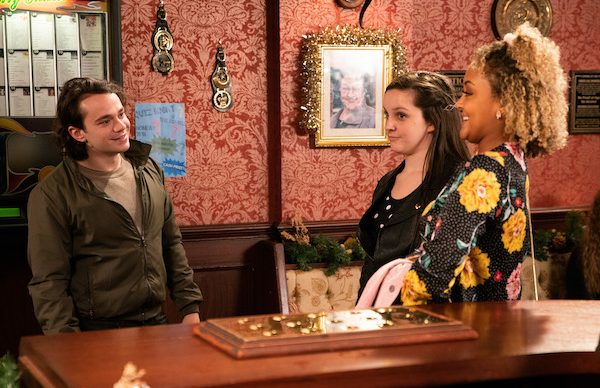 But is she about to get her heart broken?

Emma Brooker doesn’t have the best track record when it comes to romance, but that could all be about to change in next week’s Coronation Street.

She goes on a date with Seb Franklin and it looks like things are on the up.

But is she about to have her heart broken again?

Emma is nervous as she prepares to go on a date with Seb on Monday December 2. She’s so nervous, in fact, she forgets to write the questions for the pub quiz!

Chivalrous Seb agrees to help her and the gesture leads to a tender kiss – aw!

But when Emma invites him for tea the next day, he turns her down. His excuse? He’s off to meet a mate in town.

Emma’s left upset that he’d rather see his friend than her, and she thinks their romance is going nowhere.

However, she had no idea Seb is actually buying concert tickets for her!

Emma’s thrilled when he reveals the surprise and she can’t believe her luck.

So it looks like things are going well – for now.

But with the news that Seb’s former flame, Alina Pop, is returing to the cobbles, things for Emma and Seb may not run all that smoothly going forward.

Seb fell pretty hard for Alina, declaring his love for her before she fled back to the Ukraine.

Alina was a trafficked worker and once her ‘bosses’ were exposed and arrested, she decided to return home, leaving Seb heartbroken.

But as he moves on with Emma and Alina comes back into his life, it looks like he could find himself torn between two women.

Who will he pick? Will Emma be left heartbroken again?