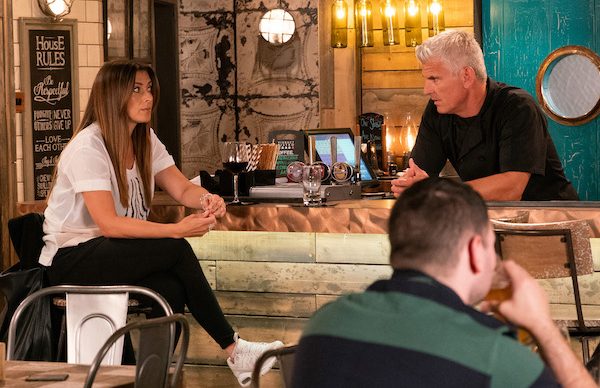 Coronation Street SPOILERS: Robert panics when Tyler turns up on the street

Tyler is leading a double life

The net is closing on on Robert when Tyler turns up on the cobbles in next week’s Coronation Street.

When Vicky keeps on at him about telling Michelle about the baby, Robert assures her that he will tell Michelle soon.

But as he returns to the street he’s horrified to see Tyler.

Tyler explains he’s on the cobbles because him and Amy have become mates and he came to see her.

Hatching a plan to stop Tyler from coming around again, he puts in a call to Amy’s dad, Steve.

Meanwhile, Michelle had had enough of her boss Ray giving her menial tasks.

Fed up she tells him to stick his job.

Later, Carla is confused when Amy tells her that Robert grassed her up to Steve about her friendship with Tyler.

But when Michelle finds out, she’s baffled as to why Robert would get involved.

Will she question Robert about his interference? And will the truth come out?

Viewers know Robert has been leading a double life.

Robert told Vicky not to mention the pregnancy to Michelle as her son Ruairi died when he was born prematurely at 23 weeks and the reason they originally split was because he wanted a baby and she didn’t.

After Vicky saw Michelle’s engagement ring, she assumed Robert planned to propose to her and he ended up engaged to both women.