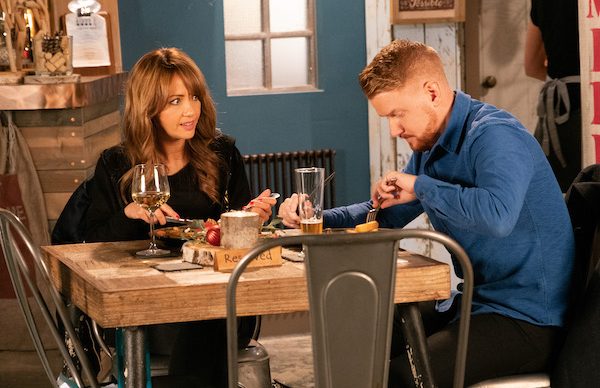 Maria drops a bombshell on new boyfriend Gary that she’s carrying his child and it’s not long before Gary is suggesting they view the flat in Victoria Court that’s up for rent.

Later Gary turns up with a 4×4 that he claims he acquired during a house clearance, but Tyrone is soon suspicious of him.

Seeing Gary present Maria with the keys to the car makes Sarah jealous and it’s not long before she realises Maria is pregnant.

After speaking to Sarah, Ali learns of Maria’s news and is worried.

Ali warns Maria that Gary is a loan shark and the furniture shop is just a front.

With Maria unsure what to believe, she has an encounter with Big Garth later that sows more seeds of doubt about her baby daddy…

Big Garth spots Maria’s designer handbag whilst putting up a poster for Weatherfield Winter Wonderland in the corner shop.

He soon assures her that it’s not a fake and would’ve cost the best part of £1000.

Wanting to know the truth, Maria confronts Gary but he’s soon spinning more lies to the mother of his unborn baby.

Read More: Coronation Street’s Mikey North reveals wife ‘tried it on’ with him while in labour!

He tells her that he’s not a loan shark and that he only beat up Ryan because he stole from him, but will Maria believe him?