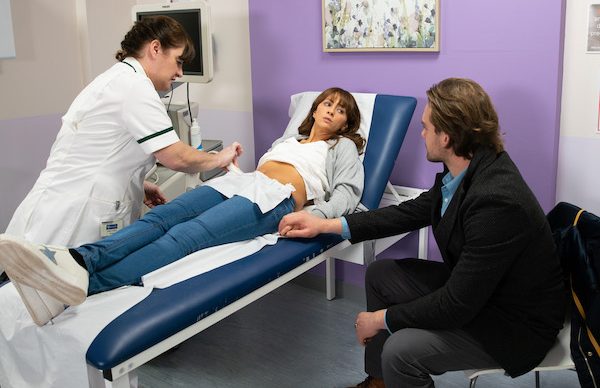 A devastating chain of events leads to tragedy...

Next week’s Coronation Street sees a heartbroken Maria Connor lose her baby, leaving her haunted by events from 11 years ago.

Maria’s devastating week starts as she confesses to boyfriend Gary Windass that she feels under the weather and thinks she is coming down with something.

The pair had made plans to go to Bristol together, but Maria insists that Gary still goes, leaving her behind in Weatherfield to combat the bug she thinks she is suffering from

However, it turns out things are a lot more serious than just a few cold germs, because Maria later discovers she is bleeding and starts to panic about the baby.

Maria confesses all to Ali and he insists on driving her to the hospital to be checked out… but as she sonographer does a scan, it’s sadly not good news.

Maria is devastated as she’s told that she has lost the baby, and the plot thickens when the doctors start quizzing her about her symptoms.

Ali quickly realises that she has measles and the doctors confirms that this is the likely cause of her miscarriage, leaving Maria baffled and heartbroken.

Ali struggles to confront Maria as she reveals that she lost a baby 11 years ago and can’t bear to go through the ordeal again, but soon Gary is back from Bristol and she is forced to confess the devastating news.

Gary reels as Maria tells him that she lost the baby, and while Maria blames herself, Gary does his best to comfort her.

Maria phones her mum to find out more about her medical history and it soon turns out that neither her or Kirk had the measles vaccination as a child.

But it is only when Audrey reveals that Bertie has been in hospital with the same virus that the penny drops and Maria realises where she must have caught it from.

Maria is stunned by her discovery, but the news doesn’t sit well with Gary and he races round to Daniel’s to blame him for Maria’s miscarriage, livid that his actions have caused so much heartache.

With Bertie also still fighting for his life in hospital, Daniel is devastated to realise what tragedy his actions have caused and he turns to Bethany for comfort.

But will Gary ever get over the fact Maria lost their baby because of Daniel?

Do you think Gary will want revenge on Daniel? Leave us a comment on our Facebook page @EntertainmentDailyFix and let us know what you think!