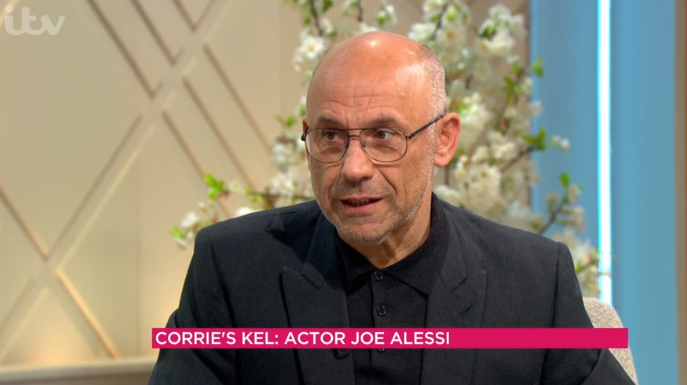 He recently joined the soap

Kel actor Joe Alessi has confirmed on Lorraine that his character will be leaving Coronation Street, however he doesn’t know when.

Joe appeared on Lorraine today to talk about the historic sex abuse storyline which Kel is currently at the centre of.

Speaking to the host, Joe said: “I have no idea [how long I have left], it is open ended.

“The character I’m playing is finite, I’ll never be a regular on Coronation Street that’s for sure.”

He continued: “My role will come to an end.”

However, Joe did confirm his exit wouldn’t be before the fallout.

Coronation Street viewers were recently introduced to Kel when Bernie and Gemma were out shopping.

Kel, who is Gemma and Paul’s former stepdad, soon made his way back into all of their lives but it was obvious Paul was hiding something.

Seeing this, Billy managed to get the truth from Paul – Kel had groomed him when he was a teenager.

Kel had convinced Paul that they were in a “relationship” when he was 14.

Recently Paul tried to make a move on Kel but was horrified to realise that he was only interested in him when he was younger.

After a fight, Kel ended up in hospital and when he came round, he told Paul he would tell the police he put him in hospital if he ever told anyone about the grooming.

Joe also spoke to Lorraine about the importance of the story, citing the increase in helpline calls to charity Survivors Manchester during the David Platt rape storyline.

“Storylines like this have a great responsibility, if you can coax men to come out and talk about it, especially working class men…

“We’re very reluctant normally to talk about these things, but it’s all for the good.”