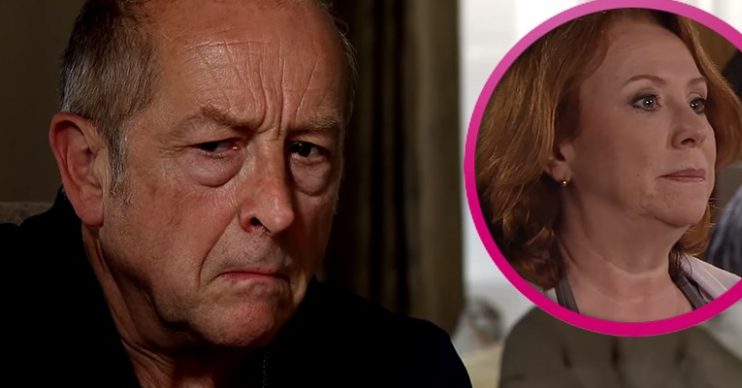 Geoff realises he’s going to have to cover his tracks and takes drastic action in tonight’s Coronation Street (January 13 2020).

For months, Geoff has been abusing girlfriend-turned-wife Yasmeen and since returning from their Las Vegas trip, his behaviour has not gotten any better.

In Monday night’s episode (January 13 2020) Cathy overheard Geoff saying some cruel words to Yasmeen, frustrated she hadn’t cleaned the house for him.

But with Cathy now concerned, Geoff makes another series of disgusting moves to cover his tracks.

Yasmeen attempts to make up for all the trouble that Geoff cruelly made her believe was her fault during tonight’s episode (January 15 2020).

She ends up cleaning all night to make Geoff happy and leaves herself exhausted.

Cathy soon stops by and quizzes her friend on what she witnessed the day before, expressing her concerns.

But Geoff quickly steps in before Yasmeen can explain, prompting Cathy to leave once more.

When Brian expresses his concerns to Geoff for Yasmeen, Geoff’s secretly seething and lies, making out Yasmeen is an alcoholic and he’s trying to help her.

Brian’s stunned and when he assumes Yasmeen gave Geoff the black eye, the DJ fails to correct him.

Concerned about Yasmeen, Brian seeks advice from Peter and when Geoff returns home, he covers his tracks telling Yasmeen he’s worried about her drinking and that others have noticed it too.

As Yasmeen absorbs what she’s been told, Peter comes to see her and invites her to join him at one of his meetings.

Geoff takes his lies even further claiming that his first wife was a violent alcoholic and Yasmeen’s drinking is bringing back some awful memories.

Geoff tells his wife if she really loves him she’ll give up drinking .

When Brian and Cathy break the news to Alya about Yasmeen’s drink problem, she listens in total disbelief and tells Yasmeen it’s absurd.

Will anyone start to realise Geoff’s lies?