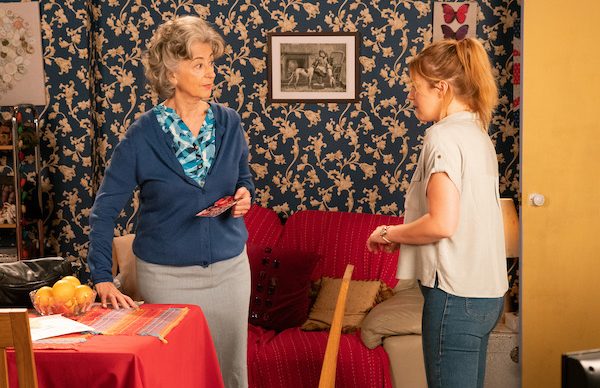 But is Jade lying?

Fiz Stape has been acting suspiciously ever since she returned to Coronation Street last month.

It soon became clear Fiz had a huge secret and many thought she was having an affair with someone she met in Birmingham.

After Tyrone catches Fiz on the phone later this week and demands an explanation, next week sees Fiz’s secret friend, Jade, come to live with the Dobbs/Stape clan.

Jade was Hope’s teaching assistant in Brimingham, who has helped Hope with her bad behaviour – and given it’s showing no signs of getting better, she might be the best person to help the little girl now.

But Evelyn is immediately suspicious of the newcomer and in true Evelyn style makes her feelings perfectly clear.

As Jade is serving breakfast, Evelyn watches on suspiciously, wondering exactly what Jade’s story is.

Meanwhile, Fiz accepts Gary’s job offer at the furniture shop and is delighted things finally seem to be coming together for their family.

Evelyn is still not happy about the situation though, and when she quietly lets herself into No.9 and catches Jade riffling through the drawers, she demands an explanation.

Jade pours her heart out to Evelyn, confessing she was in a terrible marriage and if it weren’t for Fiz she wouldn’t have survived.

She tells the grandmother that she was searching in the drawers for a photograph that she could get framed for Fiz and Tyrone as a thank you.

Fiz returns home in the middle of Jade’s tale as she tells Evelyn the details of her abusive ex, and Fiz is surprised.

But exactly why is Fiz so stunned? Is it because she didn’t expect Evelyn and Jade to get on?

Or could it be that Fiz knows Jade is lying?

There’s something strange about the newcomer, but what is it?

Is she telling the truth? Or is this just a tall tale?

Theatre actress Lottie Henshall is joining the cast as Jade, but will she be a blessing or a curse on the family in the end?