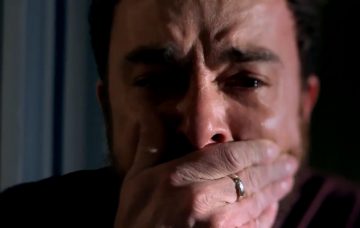 David's life is about to be turned upside down

David Platt’s life is going to be in danger in Coronation Street.

Hairdresser David is going to become the victim of a terrifying gang situation with knife-wielding thugs.

Filming pictures published by the People show David being threatened by the evil thugs in a back alley before trying to escape.

He flees and runs away but the blade-carrying gang pursue him and viewers will be left wondering if David can survive his ordeal.

A source told the newspaper: “David has really been struggling since Shona was shot and lost her memory. It leads to him putting himself in a risky situation.”

Read more: Coronation Street’s Bill Roache ‘to stay on the soap for another ten years’

He finally found love again with Shona, Clayton’s mother, but she was forced to knife her son while attempting to get him to hand himself in after his prison escape.

Shona was most recently shot at Christmas and suffered complications during surgery that left her with brain damage and no ability to remember who she is or her life with David.

Last week David was devastated as Shona told doctors at her specialist unit in Leeds that she no longer wanted to see him anymore as she focuses on trying to heal her memory.

Viewers weren’t happy that David travelled all the way to see Shona, only to be turned away.

One said: “Why did David not phone before he travelled for three hours to see her? #Corrie”

A second said: “Poor David, they could have rung him before he got the train, although he probably would have insisted on going, #Corrie”

A third said: “David being told he can’t see Shona, must be heartbreaking after he’s travelled all that way #Corrie”

Luckily Paul Foreman stepped in and convinced Josh to tell the truth – and Shona stood by him all the way through.

What do you think of David going through another trauma? Leave us a comment on our Facebook page @EntertainmentDailyFix and let us know what you think!