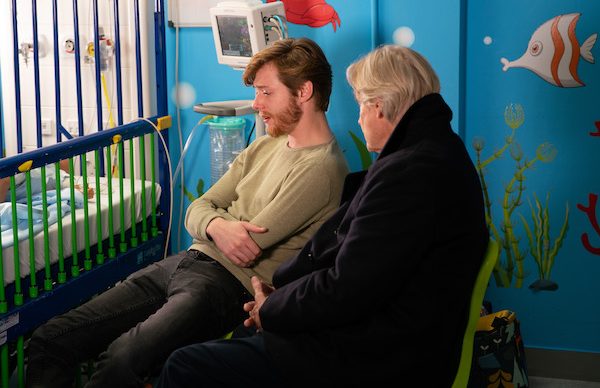 Will little Bertie be okay?

Soap fans will know Daniel has been a man on the edge since his wife Sinead sadly passed away after losing her brave battle with cancer last year.

But as Daniel struggles to cope with the demands of suddenly being a single dad, he has started to get his act together for the sake of little Bertie.

However, one thing he couldn’t face without Sinead was taking their son for his routine vaccinations, and this is something he will live to regret in more ways than one next week.

The trouble starts when Daniel finds Bertie barely conscious in his cot and desperately calls an ambulance.

But once the paramedics arrive, they soon start quizzing Daniel about the rash on his son’s back, and Daniel feels awful for not noticing it before.

At the hospital things get worse when the doctors confirm Bertie has got measles and Daniel is beside himself as he admits to Beth and Peter that he didn’t take his son back for the rest of his vaccinations.

With the next 24 hours critical as Bertie fights for his life, Daniel screams at his family to leave him alone.

But there is one person who he will let stay by his side, and that’s Bethany… and soon he is crying on her shoulder unable to take the guilt.

But just when Daniel thought things couldn’t get any worse, he discovers that Maria contracted measles from Bertie and it has caused her to suffer a miscarriage… leaving him more devastated than ever before, knowing his actions have caused so much hurt.

Bethany is on hand to offer her friend support, but when she borrows Sinead’s dressing gown to keep warm, things take a surprising turn between the pair.

As Daniel wakes from a nap, he groggily thinks Bethany is Sinead and tries to kiss her… and in his emotional state he asks her to stay as he kisses her tenderly.

But Daniel is oblivious to the fact he is asking Bethany to stay and not Sinead… but will an unaware Bethany agree?