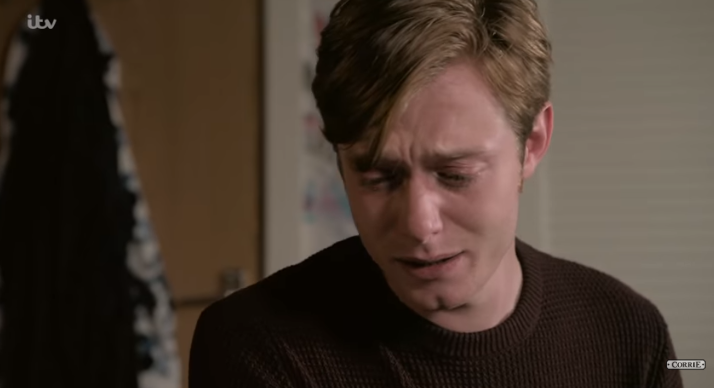 As if things weren't hard enough for him at the moment

Life has been pretty tough for Coronation Street‘s Daniel Osbourne following the death of his wife Sinead last month.

After departing the cobbles for Scotland, his family are worried about him this week.

When Ken and Claudia fail to track him down, it’s Peter who eventually finds his brother and urges him to come home for Ken’s sake.

He also tells him he and Bertie need their family around them, but has Peter done enough?

New preview pictures show Daniel does in fact return to Weatherfield to lay Sinead to rest, but they also reveal that even more trauma is about to befall the grieving widower.

He’s devastated when he discovers his laptop has been stolen.

The device contained all of Sinead’s goodbye videos and messages for Bertie and there’s no back up.

A heartbroken Daniel then goes on self-destruct as he determines to track down the laptop and retrieve one of the only remaining connections he has to Sinead.

As Daniel goes off the rails, can anyone step in and save him from himself?

Daniel and the Barlow/Tinker clans were left devastated when Sinead passed away from cervical cancer in October.

She had been battling the disease for a year after discovering she was ill shortly after falling pregnant with her son.

Sinead delayed treatment in order to deliver Bertie safely in January, and then underwent aggressive treatment to save her life.

Although in July, she and Daniel got the good news her cancer was stable, in September, on the morning of her wedding to Daniel, she found a lump in her neck.

Further tests showed the cancer had spread to her lymph nodes and liver and she was given months to live.

That diagnosis was reduced to weeks when life-prolonging treatment didn’t work.

She passed away while listening to Daniel reading Bertie a story in heartbreaking scenes last month.

Coronation Street is on Monday and Wednesday at 7.30pm and 8.30pm, with an hour-long episode on Friday at 7.30pm on ITV.