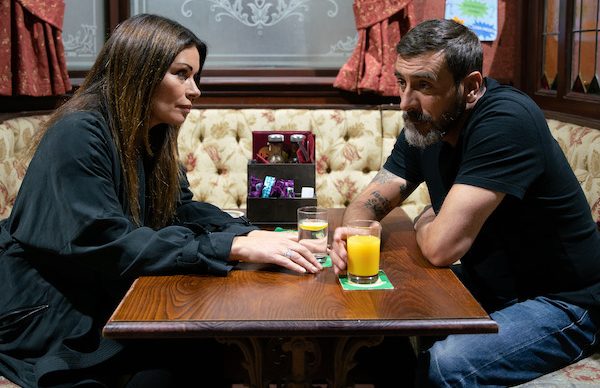 Will they get past the bump in the road?

Carla Connor and Peter Barlow have been through more than most couples, but it’s not over yet for the Coronation Street pair.

The fan favourites are finally in a happy place – well, as happy as it gets in Weatherfield! – and have even discussed having children together.

But future scenes will see the pair rocked by revelations from Carla’s past.

That kicks off in April and provides a bump in the road for her and Peter.

Now, soap boss Iain MacLeod has revealed that Carla will slowly make her way back into the business world – but there’ll also be a bump in her relationship with Peter when a ghost from her past appears.

He told Inside Soap: “First we all felt that we wanted to see Carla regain her status as queen of the cobbles.

However, Iain also warned viewers that we will finally discover what happened to Carla during the weekend she went missing last year.

And the revelation could cause trouble for her relationship with Peter.

He continued: “We will also find out something about Carla’s lost weekend where she went missing during her mental health story.

“That kicks off in April and provides a bump in the road for her and Peter.”

However, fans should be reassured that the couple look set to overcome the obstacles, with Iain telling Metro.co.uk: “Ultimately there is no prospect of them splitting up in the foreseeable. I tend to feel that they are Burton and Taylor.

“But will they be together in 10 years’ time? Who knows?”

Do you think Carla and Peter will last the distance? Leave us a comment on our Facebook page @EntertainmentDailyFix and let us know what you think!