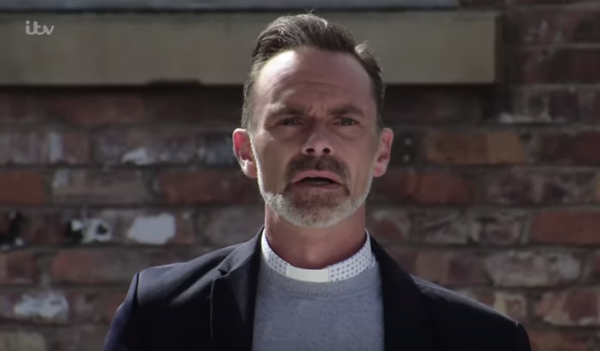 Newcomer Kel’s presence in Coronation Street has left more than one resident rattled.

After Paul Foreman admitted to boyfriend Billy Mayhew that he slept with his mum’s boyfriend Kel when he was just 14, Billy quickly realised Paul had been groomed and abused.

Paul can’t accept it though and wants Billy to stay out of it.

However, knowing what Kel did, Billy is immdiately frightened when he spots Kel with young Joseph in the car.

As the boyfriend of Gemma Winter’s mum, Bernie, Kel is worming his way in with Chesney Brown‘s family and he ends up looking after Joseph.

In a preview shared to Corrie’s YouTube page of tonight’s episode (Friday September 27) Billy tries to talk to Paul once again.

As Billy tries to make Paul see sense, he tells him: “What kind of bloke takes consent from a 14-year-old kid?”

Paul hits back: “Look, I’ve told you all right, keep out of it, it’s nothing to do with you.”

As Paul storms off, Billy is horrified when he sees Kel’s yellow car whizzing down the cobbles – and Joseph in the passenger seat.

He quickly follows the car back to Ches’s house, where he watches as Kel parks and opens the door for youngster.

Billy quickly steps in and invites Joseph to have tea with him and Summer instead – hoping he’s got the lad out of harm’s way.

But can he convince Paul to see what Kel did was wrong?

Later, Paul is playing happy families with Kel and Bernie in the Rovers, but when old photos get handed out, Paul realises just how young he was when he was in a ‘relationship’ with Kel.

Billy later finds him and explains once again he was groomed and abused, and despite Paul insisting he loved Kel, it’s clear he’s starting to realise something was very wrong.

Can Paul get through this with Billy’s help?

Next week sees Paul lash out at Kel and he’s rushed to hospital after Paul attacks him.

Will Paul reveal the reason he lost it?