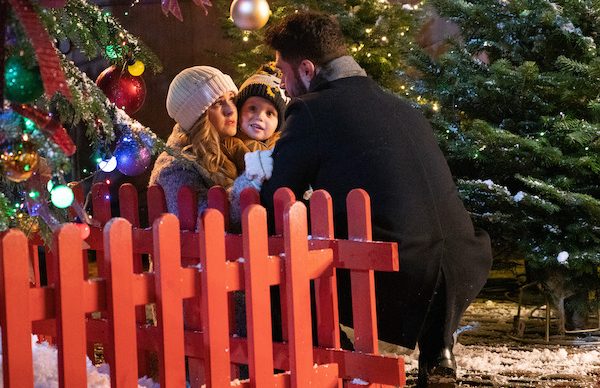 Adam gets down on one knee

It looks like there could be a Platt/Barlow wedding on the horizon as Adam proposes to Sarah this Christmas on Coronation Street.

It’s set to be another dramatic Yule on the cobbles as Derek comes to the street with a gun looking for revenge on Gary Windass.

While all of this is happening, the Platts are not only celebrating Christmas but David’s birthday too.

With everyone forced to hide in a panic, Adam decides to propose to his girlfriend Sarah.

“And she’s got her son Harry, she’s obviously very aware that there’s this man out there and Adam turns to her and says, ‘look when we get out of this, and everything’s going to be all right, but when we do get out of this, will you marry me?’

“And he tries to awkwardly get down on one knee! And she’s like ‘what are you doing?’ So she says ‘yes of course, of course I will, but shush!’ so it’s not romantic!

“But it kind of creates a bit of tension, would he have asked and would she have said yes if they weren’t in that danger?

“So I think Adam thinks that Sarah’s not interested, but she is, she does love him definitely.”

But with Derek on the cobbles with a gun looking for Gary, will all the Platts make it to Boxing Day, or will someone get caught in the crossfire?