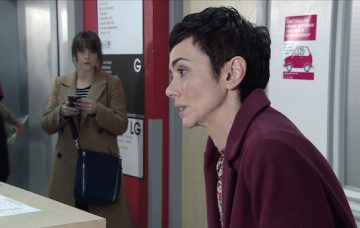 Could May be the key to freeing Sally?

There’s drama in Weatherfield next week as Tim and Sophie try to prove Sally’s innocence by ‘kidnapping’ Duncan’s wife and using her to blackmail the conman.

After the shock of Duncan getting hit by a car sinks in, Tim is horrified to discover his nemesis is critically ill in hospital, leaving him terrified he might die before confessing the truth about Sally’s innocence.

When Tim tells Sophie that Duncan’s fighting for his life after they had a row, she goes to the hospital to see him for herself.

But once she gets there she’s stunned to come face-to-face with May, the wife he claimed was dead and used to get charity money out of Sally when she was mayor.

Pretending she is his neighbour, Sophie befriends May and gets her talking about Duncan, but it’s only when May reveals that the doctors are sending him to another hospital that Sophie sees her chance to get her hands on the evidence she needs to prove Sally is innocent.

Offering to give May a lift to the new hospital that Duncan’s being transferred to, Sophie is thrilled to get May in her car and takes a subtle photo, before sending it to Tim.

Sophie tells Tim that May is their bargaining chip and he heads to the hospital on a mission to see Duncan and get a much-needed confession out of him.

Showing Duncan the picture of May, Tim tells him he needs to do as he’s told from now on, or May could be in trouble. But Tim’s not really that scary – will Duncan listen?

It seems not – because despite the fact his wife could be in trouble, Duncan sticks to his story and refuses to admit that he fleeced Sally.

Tim calls Sophie and tells her to get May on the phone, hoping that if Duncan can hear her voice then it might make him see sense, but as Sophie takes the phone call, May seizes the moment and does a runner, leaving Sophie and Tim back at square one.

Thankfully Gina comes to the rescue by tracking May down at the tram stop and grabbing her. Gina begs May to tell the truth, telling her that if she doesn’t do it for herself then at least do it for her daughter, Olivia.

Whether or not Gina’s words prompt a confession from May and Duncan remains to be seen, but it looks like Sally’s family are going to have to work fast if they want to get her out of jail alive.

Sally is horrified when she finds prison bully Marcia in her cell, and when she pulls out a knife, it looks like Sally’s days might be numbered.

Despite the fact Tim, Sophie and Gina are so close to getting her out of prison, could Sally be attacked and left for dead just as she’s about to be freed?

Do you think Sally will live to see freedom? Leave us a comment on our Facebook page @EntertainmentDailyFix and let us know what you think!