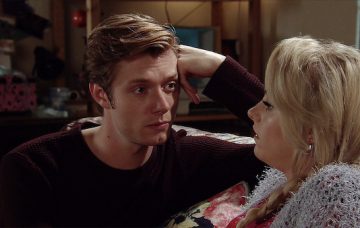 Sinead Osbourne’s heartbreaking cancer diagnosis has had us all in tears over the last few weeks.

But as she continues to refuse her chemotherapy, she begins lying to Daniel to cover her tracks – and starts investigating alternative therapies.

Despite having already turned down her second chemo appointment, Sinead can’t get out of her next one when the hospital call and Daniel answers the phone. Sinead’s forced to agree she’ll be there, but is soon plotting how she can avoid it.

She goes for a homeopathic massage to take her mind off everything and she meets a young mum also battling cancer. The woman, Stef, tells Sinead she has stopped her chemo too.

Stef reveals she’s treating her illness homeopathically and has adopted a strict diet.

An intrigued Sinead is keen to hear more about how she too can do this.

Wanting to make sure she has all the facts, Sinead invites Steff for a cuppa and they talk about all the chemo alternatives.

But Sinead still refuses to mention anything to Daniel and he thinks she’s still having her chemo sessions.

When he wants to go with his wife to her next one, Sinead thinks quickly and gets Stef to call Daniel pretending to be from the nursing home. Stef lies Flora is upset and Daniel heads off to be with her – leaving Sinead to attend her appointment alone.

Or not as the case may be because she turns round and heads home.

Daniel returns later and Sinead lies that her chemo went well. She also tells him she’s going to become a vegan to give her and the baby a fighting chance of survival, which Daniel agrees to join in with.

Stef isn’t too happy with Sinead lying to her husband though, and although she’s supportive of her new friend, she tells Sinead she must come clean to Daniel.

But knowing how Daniel feels about her getting treatment for her cancer, will Sinead come clean or will she keep deceiving him?

At first she refused to tell Daniel about the cancer at all telling Ken, who had gone with her to the hospital, that he was also forbidden from telling Daniel the truth.

It all came out, however, when Sinead collapsed and was rushed to hospital.

Daniel was furious when he found out his father knew and in a special Barlow four-hander episode featuring only Sinead, Ken, Daniel and Peter, Daniel lashed out at his dad.

He was talked round by Peter who said they all had to pull together to get Sinead through this.

But with her refusing traditional treatments, will there be more heartbreak ahead?

Actress Katie McGlynn, who plays Sinead, has said even she doesn’t know where this is going to end and it’ll play out well into next year. Let’s hope both Sinead and her baby make it through this.

Should Sinead tell Daniel the truth? Leave us a comment on our Facebook page @EntertainmentDailyFix and let us know what you think.