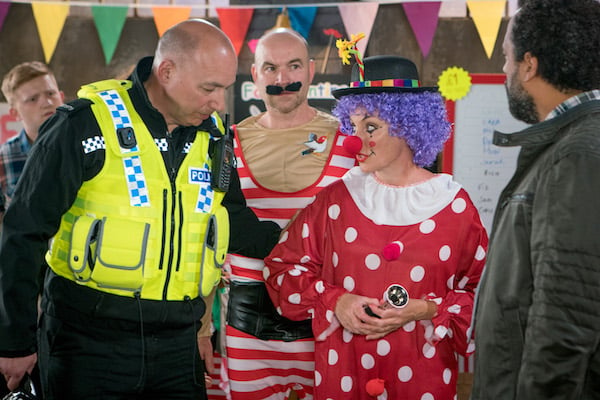 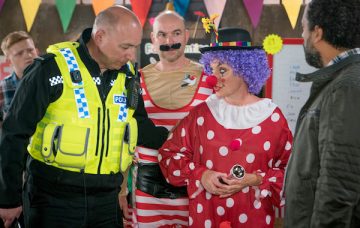 The shamed mayor is dressed as a clown at the time

Poor Sally Metcalfe faces humiliation next week when the police arrive at the fundraiser she’s organised for Jack Webster and arrest her for fraud and money laundering.

It’s a particularly humiliating experience for poor Sally who is dressed as a clown at the time of the arrest.

Sally recently handed over £40k of council funds to Duncan, a man who claimed his wife had died of a stroke and wanted to set up a charity to help friends and family of stroke victims.

Sal was taken in by his heartbreaking story and hurried through the funds when he told her he’d found a great deal on some equipment.

But once the money was transferred, Duncan disappeared and his account was cleared out.

Since then Duncan has been found and arrested by the police, but has told them that Sally was complicit in the fraud.

Sally is mortified when the police show her copies of her bank statements and question why Duncan deposited £1k into her account.

When she pulls her husband Tim up on it, he’s forced to confess that the grand he claimed was a Streetcars bonus was actually what he thought was a bank error.

With it now being obvious that the money was from Duncan, Sally fumes at Tim for making her look guilty, leaving him mortified.

She also drops the bombshell that Duncan is claiming they were having an affair. But will Tim believe it?

Later in the week Sally is gutted when she discovers the press have got hold of the story and that Barlow’s Legal Services are representing Duncan.

She angrily confronts Adam about it before Gina reveals she’s been in touch with an old school friend who is now a hot shot fraud lawyer.

Will she be the key to getting Sally out of her nightmare situation?

Will Sally get off? Leave us a comment on our Facebook page @EntertainmentDailyFix and let us know what you think!