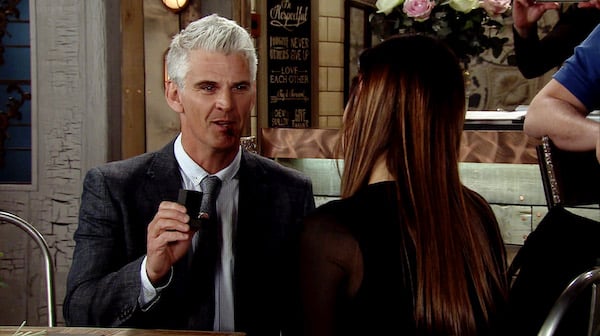 There’s romance in the air next week for Coronation Street‘s Michelle Connor and Robert Preston as the pair get engaged… but it soon becomes clear Robert is hiding a huge secret.

Michelle is thrilled when she gets back together with Robert his week… but while she is on cloud nine after their reunion, her boys Ali and Ryan aren’t going to be dusting off their best man speeches any time soon.

While Michelle tells the pair that this time her and Robert are for keeps, Ali and Ryan aren’t convinced, but they go along with it anyway after seeing how happy she is.

But things are set to get a lot more serious between Michelle and Robert next week when Robert calls a meeting with the Connors and tells them he is planning a surprise engagement party.

As the Connors all gather that evening at the bistro, Robert waits outside for Michelle to arrive and they enter the bistro as Michelle’s friends and family all shout a half-hearted ‘surprise’.

With a ‘happy engagement’ balloon on proud display, it doesn’t take Michelle long to work out what is going on and eventually Robert gets down on one knee to propose.

As Michelle gets into full-on wedding planning the following day, she organises to meet Billy at lunchtime to talk weddings.

But when Robert is a no show, Michelle is left fuming and realises that she has been lied to.

At the bistro later that day, Michelle confronts her fiancé about the fact he didn’t come to the meeting and tells him that she knows he has been lying to her about his whereabouts.

Robert thinks fast and tells her that he was at the travel agents, organising them a fancy honeymoon. But will Michelle buy his lies?

And if Robert wasn’t organising a romantic trip for two, where was he?

Clearly the chef is up to something… but what?

With both Kym Marsh, who plays Michelle, and Tristan Gemmill, who plays Robert, both departing the cobbles later this year, it is yet to be seen if they leave together or separately.

What do you think Robert is hiding? Leave us a comment on our Facebook page @EntertainmentDailyFix and let us know what you think!