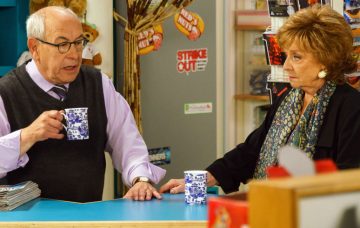 Norris Cole will reportedly return to the cobbles after getting engaged to Emily Bishop’s deaf niece Freda.

Coronation Street legend Malcolm Hebden – who first appeared on the cobbles in 1994 – was back on set this week for the first time since the actor was put in an induced coma in December 2017, and it’s said he will be returning with Emily’s niece, played by Ali Briggs.

“Norris’s first scenes were never going to go under the radar. But no one thought he’d come back an engaged man.

“He turns up with Freda and reveals they are getting married and want to buy a house together. She’s been in the show before – Freda Burgess, the niece of Emily.

Read More: New love for Corrie’s Eileen but somebody is NOT HAPPY

Last year, it was revealed Malcolm, 78, would be returning to the ITV soap for a “sort of cameo”.

Show boss Iain MacLeod said at the time: “He’s back for a short stint in a little sort of cameo return in the hope we can have him back permanently in the future.

“He’s on that list of Emily Bishops of characters who are so Corrie that the show doesn’t feel correct without them in there.

“Soap characters come and go – but I am reading bits in the scripts where I know Norris would have something to say.”

Are you looking forward to Norris returning? Leave us a comment on our Facebook page @EntertainmentDailyFix and let us know what you think!