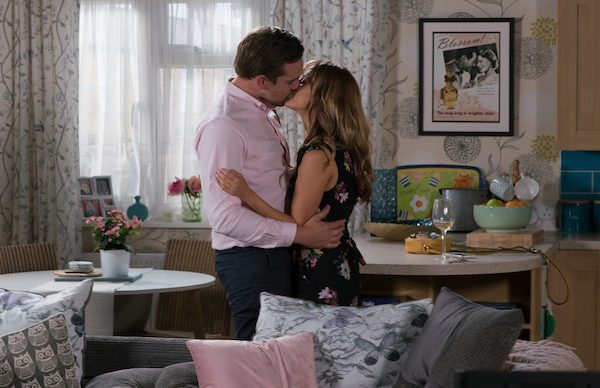 Is this the start of something special?

There’s romance in the Weatherfield air as Coronation Street’s Maria Connor and Ali Neeson finally kiss next week. Could this mean Maria’s spate of disastrous dates are finally over?

After recently deciding to take drastic action and sort out her non-exisitant love life, Maria joined an online dating app.

But after originally getting some unsavoury messages from potential suitors, it was revealed that she was sending out the wrong message entirely after putting on her page that she was looking for someone to ‘watch Netflix and chill’ with.

After realising that ‘Netflix and chill’ doesn’t mean catching up with a good boxset, Maria was mortified and thought her dating days were doomed.

But while she was stressing over the fact she couldnt get a date, little did she realise Dr Ali was lusting after her from across the cobbles.

Next week sees Maria’s dating disasters continue when Audrey promises to set her up with her 3pm client at the barbers called Bob.

When a good-looking man walks in at 3pm, Maria starts to flirt up a storm… and is mortified when he later tells her that she’s married.

Maria suddenly realises that she has missed a text from Audrey, telling her that Bob had cancelled.

Convinced her dating days are long gone, Maria thinks she is destined to be single forever. But when Emma urges her to check her internet dating app, she is pleased to see she’s had some interest.

Maria is thrilled when she meets Ben – internet date number one – particularly because he is good looking and definitely single this time.

But when Ben reveals that he still lives at home with his mum, alarm bells start to ring for the single hairdresser.

However, it’s when Ben’s mum turns up at their date and plonks herself down at their table that she realises just how much of a mummy’s boy Ben is, and Maria quickly makes her excuses and leaves.

Next on her list of disastrous dates is a man called Rex. After meeting in the Bistro, Maria is horrified when Rex tells her that he likes to dress up as a dog, and proceeds to show her pictures of himself in his canine get up on his phone!

Ali is working that evening and, thinking the whole thing is hilarious, offers Rex a doggy bag for his leftover food.

But Maria’s date doesn’t see the funny side and storms out, leaving Ali amused and Maria mortified.

Armed with a bottle of wine and an apology, Ali heads to Maria’s later that evening and it’s not long before the sparks start to fly between the pair.

Having finished the bottle of wine, Ali leans in for a kiss and Maria finally kisses him back.

Could this be the end of Maria’s romance drought at last?

Do you think Maria and Ali make a good couple? Leave us a comment on our Facebook page @EntertainmentDailyFix and let us know what you think!