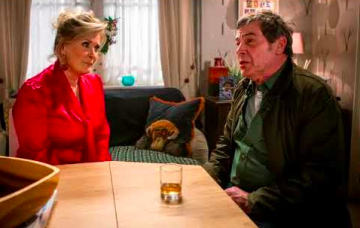 Liz McDonald is going to be left heartbroken next week on Coronation Street.

The barmaid had a passionate affair with Johnny Connor but it all came to an end when she called the police on him when he abducted his baby granddaughter Susie.

And while Johnny eventually was forced to back down from sacking Liz after taking over the Rovers Return, he isn’t making her life any easier.

She warned him that she was “going nowhere” despite him being the boss.

It forced him to take drastic action with the bar rota.

Now next week Liz is going to realise that Johnny has jumped through hoops to stop them working together.

He leaves her on shift with all the other staff and his wife Jenny Bradley, but makes sure they don’t cross paths.

This devastates Liz and she struggles to hide her heartbreak.

Unfortunately her heartbreak is visible to Gemma Winter, and she threatens to make the entire situation much, much worse.

Assuming Liz’s upset is because of the recently departed Mike Thornberry, Gemma tries to make things better by contacting Liz’s ex who worked out who she really had feelings for.

Pulling Gemma to one side she lets rip and warns Gemma off contacting Mike or getting involved in anyway.

But Liz’s dramatic reaction could be set to expose her affair to the Weatherfield masses.

Her son Steve already knows about his mum’s heartbreak over the affair, but Johnny has managed to keep it a secret, although just barely.

His wife Jenny, who is regularly a few sandwiches short of a picnic, suspected something was going on between the pair in the aftermath of Aidan’s death.

But could she now be about to discover what’s been going on?

And could it mean a reunion for Liz and Johnny?

Who do you think Johnny should be with? Leave us a comment on our Facebook page @EntertainmentDailyFix and let us know what you think!