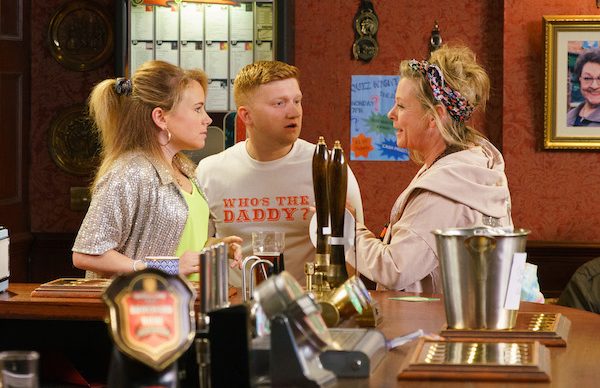 Coronation Street SPOILER: Gemma’s mum tries it on with Chesney

Will he be tempted?

Just as it looks like Chesney Brown and Gemma Winter might get back together, Gemma’s mum arrives in Coronation Street next week to cause havoc.

While they might be welcoming four babies into the world together later this year, former couple Gemma and Chesney are just friends.

But next week it looks like they might kiss and make up – only for Gemma’s mum to arrive on the cobbles and ruin everything.

The parents-to-be share their quad story on Weatherfield Radio next week, and they soon find themselves local celebrities as everyone listens to their interview.

Gemma and Chesney are given food for thought when Jane the radio host tells listeners that the pair aren’t married, and urges everyone to send in messages of support, encouraging the pair to tie the knot.

However, Bernie couldn’t have picked a more annoying time to make her arrival, because just as Chesney tells Gemma that he’s never stopped loving her and wants to give their romance another bash, she interrupts and the moment is ruined.

But Bernie is clearly someone who brings trouble wherever she goes, because she’s only been on the cobbles for five minutes before she’s telling Gemma all about how she is about to be made homeless.

While Chesney isn’t taken in by Bernie’s sob story, Gemma falls for it completely and offers her mum the money that the Rovers locals have donated towards funding the quads.

Chesney is horrified at Gemma’s offer and puts his foot down, telling her there is no way they’re giving away their babies’ money.

And he’s not the only one who doesn’t seem to like Bernie… because when Paul arrives at the pub and sees his mum there he’s appalled and tells Gemma that this will all end in tears.

Chesney feels bad seeing Gemma upset over her mum and offers for Bernie to come and stay at number 5 until she finds somewhere else to live.

Gemma is thrilled, but it’s soon an offer Chesney is regretting when he says he’ll sleep on the sofa, only for Bernie to suggest they share his big bed instead!

Chesney is totally freaked out when Bernie  – who is stark naked in his kitchen the following morning – suggests they spend the day in bed together. He confides in Paul, who confronts his mum about causing trouble.

Gemma decides the only way she can work out who is telling the truth is to move into number 5 herself and keep an eye on the pair… but will it all end in chaos?

Do you want Gemma and Chesney to get back together? Leave us a comment on our Facebook page @EntertainmentDailyFix and let us know what you think!