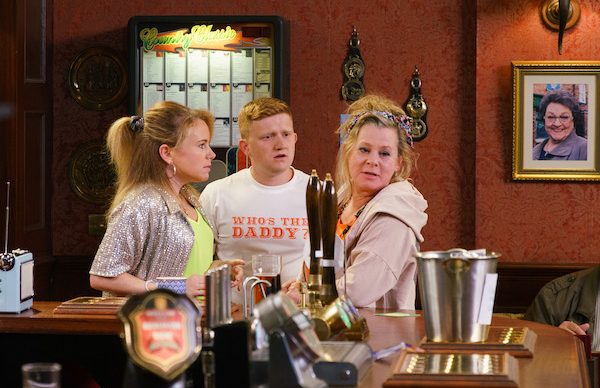 She's not going to make many friends in Weatherfield

Gemma and Chesney are in for a shock when Gemma and Paul’s mum Bernie arrives in tonight’s Coronation Street (July 24 2019).

Gem and Ches, who are expecting quads, go on Weatherfield radio to share their story and soon find themselves local celebrities as everyone listens to their interview.

The pair are given food for thought when Jane the radio host tells listeners that the pair aren’t married, and urges everyone to send in messages of support, encouraging them to tie the knot.

However, in what seems to be a telling character trait, Bernie couldn’t have picked a more annoying time to make her arrival!

Just as Chesney tells Gemma that he’s never stopped loving her and wants to give their romance another bash, Bernie interrupts and the moment is ruined.

In a preview on Coronation Street’s official YouTube channel, it shows Gemma, Bernie and Chesney sitting in the Rovers and residents aren’t exactly overjoyed at her arrival.

As Bernie feels Gem’s bump she says to her daughter: “Fingers crossed you won’t give birth to an ugly baby.

“When you popped out you had a face like a badly made meat and potato pie.”

The kebab shop worker quickly tells her mum that she is expecting four babies but her mother isn’t surprised.

Gemma introduces Chesney and explains he’s the dad, and Bernie responds with: “Him? Well he doesn’t look like he could knock the skin off a rice pudding let alone anything else. I’ll have to take your word for it.”

As the conversation continues, Bernie continues to be rude to Chesney calling him “Chutney” and accusing him of being possessive when he shuffles round to get involved in Gemma and her mum’s conversation.

Chesney is left unimpressed when Bernie tells him to go while she speaks to Gemma.

It’s clear that Chesney isn’t the only one who hasn’t taken to Bernie as Kirk and Jenny look on in disgust at her obnoxious behaviour.

It looks like Bernie will be sticking around as she tells her daughter that she is homeless.

Whilst Gemma wants to give her the money meant for the quads, Chesney refuses but says she can come and live at No.5.

Are you looking forward to Bernie’s arrival? Leave us a comment on our Facebook page @EntertainmentDailyFix and let us know what you think!