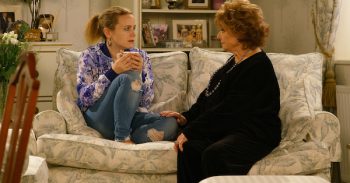 How will Chesney react to the bombshell news?

There’s shock heading for Coronation Street’s Gemma Winter next week when she discovers she is pregnant. But where does this leave her troubled romance with Chesney Brown?

Corrie fans will have seen that Chesney and Gemma’s relationship has been on the rocks recently. One minute they’re totally loved up, and the next they’re arguing like there’s no tomorrow.

But it seems the pair are going to have to get their act together pretty sharpish when Gemma finds out she is in the family way next week.

The couple’s week doesn’t get off to the best of starts when Chesney is upset with Gemma when she seems to be hungover again, and is too sick to go to Bertie’s christening.

But even that goes monumentally wrong when she falls asleep and leaves the pie to burn in the oven.

Later Gemma is still feeling bad about her cross words with Chesney, but she soon changes her mind when she sees his phone and reads an incriminating message from Tyrone to Chesney. But what does it say?

Chesney suggests that they get fish and chips after Gemma’s fish pie disaster, but she is upset and tells him that she isn’t in the mood and wants to be on her own.

With the mysterious text said still clearly playing on her mind, Gemma confides in Rita about how she doesn’t think Chesney is serious about their relationship and that she is apparently ruining his life.

Things don’t get any better later in the week when Gemma wakes for yet another morning where she feels sick, and Chesney comments that if she is hungover again then she must have some sort of drink problem.

Gemma heads back to Rita’s to vent about their issues, and Rita gently suggests that perhaps the sickness isn’t to do with drinking and more to do with being pregnant.

Shocked, Gemma does a test and is stunned to see it is positive… but how will Chesney react when he finds out he’s going to be a dad again?

Read more: Coronation Street’s Tracy and Steve: The history of their relationship

Rita tells Gemma she needs to go and see Chesney and tell him her news, but it seems the conversation doesn’t end up happening because by Friday next week Gemma is moving her belongings out of number 5.

Chesney is none the wiser he has got a little one on the way and when he later sees Gemma looking faint, he takes her to the medical centre, oblivious to the fact she is feeling off because she’s pregnant with his baby!

As Gemma goes into see the doctor alone, she is shocked to discover she is between 9 and 10 weeks pregnant and decides that although she is terrified, she is going to keep the baby.

Rita is thrilled, but how long will it be before Chesney discovers the news?

Do you think Gemma will make a good mum? Leave us a comment on our Facebook page @EntertainmentDailyFix and let us know what you think!