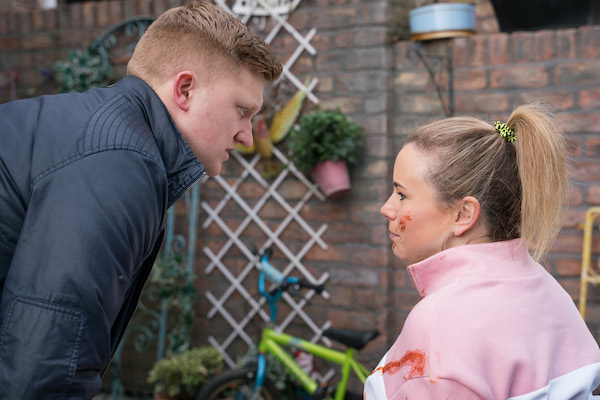 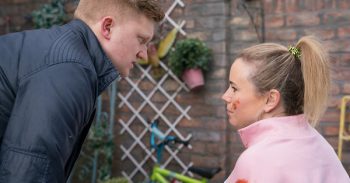 Is their romance over already?

Corrie fans spent months waiting for Chesney and Gemma to finally get together and become a couple – but it seems the cracks are already beginning to show in their romance.

Growing tired of clearing up after slobbish Gemma all the time, Chesney is at his wits’ end, especially when Gemma keeps inviting brother Paul over.

Read more: Every landlord and landlady of the Rovers Return

But just when he is getting fed up with the Rovers barmaid, nothing can prepare Chesney for when he gets home next week and finds a trail of blood leading through the living room and out into the garden.

Out in the backyard, Chesney is horrified to find Gemma bound and gagged and desperately rushes to call the police before finding out what has happened.

But whatever drama Gemma has been caught up in remains a closely guarded secret – however it can’t be life threatening because the following day she is causing more headaches for Chesney when she cheats in a radio quiz show.

When Gemma finds out Brian has been banned from taking part in the radio quiz show because he argued with the DJ, she comes up with a plan.

Gemma takes part in the quiz with Brian holding up the answers for her, and when Chesney finds out what the pair are up to, he is fuming.

Chesney tears strips off Gemma, incredulous at how she can be so scheming… but little does he know that this isn’t the end of her game-playing.

Later in the week Chesney is faced with more drama at home, this time coming down the stairs to find the washing machine flooding and Gemma oblivious because she’s got her headphones on.

Gemma is mortified and promises to get a new machine… but instead of heading to a shop, she goes to see Hong Kong Stuey who cuts her a deal.

Chesney is horrified when he comes home to see smoke billowing under the door and loud music playing, and enlists Tyrone’s help to break down the door, thinking his home is on fire.

But of course, Gemma is to blame once again, and it turns out she brought a sound system and a smoke machine from Stuey, leaving Chesney baffled.

At his wits’ end, Chesney admits to Tyrone that living with Gemma is like having another child and wonders if they have any sort of future together.

Could they be over already?

Do you think Gemma and Chesney can make their romance work? Leave us a comment on our Facebook page @EntertainmentDailyFix and let us know what you think!