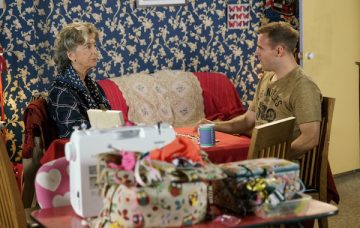 She's not the kindly grandma Ty was hoping for...

Tyrone Dobbs hasn’t quite landed himself the perfect granny in the form of Evelyn Plummer.

Next week he discovers she’s been stealing from Vera Duckworth’s jewellery box, but will he kick her out?

Evelyn moved in with Fiz and Tyrone after being thrown out of her own home, but Fiz hasn’t been happy about their new house guest.

Ty, however, is determined to hang on to his family and has forgiven the battleaxe many a sin so far.

But stealing from Vera might be a step too far, even for lovable Tyrone.

It all comes out after Fiz sees Evelyn is wearing what she claims are new earrings. But Fiz is a wise one and knows who the jewels really belong to.

It’s not long before she finds the evidence she needs and leads Tyrone to it. She shows him Vera’s half-empty jewellery box under Evelyn’s bed. There’s not much she can say to talk her way out of this one.

Even mild-mannered Ty can’t defend his grumpy gran and confronts her, demanding to know why she thought she could take Vera’s earrings without asking.

Angry, Tyrone tells Evelyn it’s not working her living with them, but she has a trick up her sleeve to get him to change her mind.

She turns on the emotional blackmail and tells him how grateful she is that he’s put a roof over her head, but she knows she’s outstayed her welcome.

Immediately feeling guilty, Tyrone doesn’t know what to do. He’s not the type to kick his grandma out on the street – but how will Fiz react if he lets Evelyn stay?

It’s already been revealed the acid-tongued relative will drive Fiz out of Weatherfield when actress Jennie McAlpine goes on maternity leave.

Does this spell the end of Fiz and Tyrone? Or will one of soaplands’ most loved couples just be taking a break from each other? And will Evelyn find a way to come between them even more while Fiz is gone?

Should Tyrone kick Evelyn out? Leave us a comment on our Facebook page @EntertainmentDailyFix and let us know what you think!