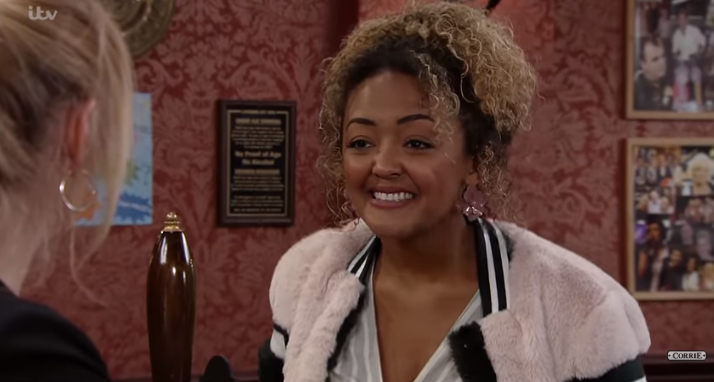 Is there set to be another shock cobbles exit this year?

It’s all set to get a bit too much for Coronation Street‘s Emma Brooker when she discovers the truth about her dad – but could all the secrets and lies lead to her exit?

Actress Alexandra Mardell has been spotted filming scenes with a suitcase, sparking fears she could be next to quit the cobbles.

Reports last week suggested that 90s Corrie hairdresser Fiona Middleton is Emma’s mum and will return to the Street to tell her daughter her dad has died.

Angela Griffin is expected to reprise her role as the hairdresser – who last appeared in Weatherfield in 1998 – and she looks set to return with bombshell news for fellow hairdresser Emma, who will be left “completely devastated” about her father.

A TV source told The Sun Online: “Emma hasn’t mentioned her family much since arriving on the cobbles but she does love them.

“She’s going to be completely devastated by the sudden death of her dad. She was the apple of his eye and she worshipped him.

“It’s going to be really tough for her. Especially when her mum Fiona visits to tell her the heartbreaking news.”

While Emma is to be told her dad has died, Fiona’s ex Steve McDonald (Simon Gregson) looks set to find out some bombshell news of his own – that he is Emma’s real father.

A source recently told The Sun: “Angela’s return is short and sweet but it has huge implications for Steve.

“She’s back on screens and he will find out that the dates that he was with Fiona tally up to when Emma was born.”

Steve’s mum Liz McDonald (Beverley Callard) is expected to work out that Emma, born in 1999, was conceived in 1998 when her son was dating Fiona.

But new on-location pictures have emerged of Emma with suitcases at a station looking glum.

It’s been said that she can’t bear all of the trauma that’s befallen her and is unwilling to form a bond with Steve, so flees Weatherfield to get away.

Having discovered her whole life has been a lie, will Emma ever come back?

Could this be the last we see of her – and yet another exit for a huge Coronation Street character?

Corrie has been hit by a string of exits this year, with Bhavna Limbachia (Rana Habeeb) and Connie Hyde (Gina Seddon) already having left, and Kym Marsh (Michelle Connor), Tristan Gemmill (Robert Preston), Faye Brookes (Kate Connor), and Lucy Fallon (Bethany Platt) all leaving soon, as well as Katie McGlynn (Sinead Tinker) rumoured to be off.

If Alexandra were to go too, that would be yet another blow for Corrie as it continues to lose its high profile stars.

Ever since Alexandra joined the show in April 2018 fans have speculated she could be Fiona’s daughter, because the pair are both hairdressers and have similarities.

However, Alexandra has previously insisted the potential plot is “definitely not true”.

Emma’s not had the best of luck since she arrived in Weatherfield – she shacked up with David Platt, but he soon went back to girlfriend Shona.

She then moved onto Chesney Brown, but his heart belonged with Gemma Winter, and Emma found herself dumped again.