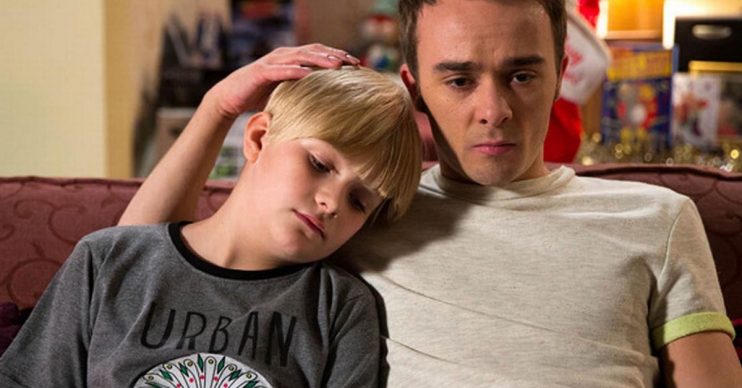 The grandma arrives intent on taking him away

David Platt is currently languishing in jail counting the days until he’ll be released and can reunite with his family, including stepson Max Turner.

Which gives Max’s grandmother Marion Logan ample opportunity to swoop in and attempt to get custody of the teenager.

According to The Sun, Coronation Street favourite David is set for a heartbreaking storyline in the coming months, as Marion arrives in Weatherfield demanding custody of Max.

And with the hairdresser currently in jail for his part in stealing Audrey’s £80,000 inheritance, he doesn’t exactly look like a role model daddy.

The newspaper’s website reports that “it was only a matter of time before Marion returned”.

A source said: “She’s got two grandchildren living where her son was murdered because she thought they could give Max the best home.

“But with David in prison and it becoming clear Max isn’t coping without his stepdad, Marion decides she’s going to have to step in and put him first.”

Viewers will remember that Marion is the mum of evil Callum Logan – Max’s biological father who was murdered by ex-Kylie Platt.

The source added: “It’s devastating for the Platts. Max has been through so much with his mum murdering his dad and his stepdad being in and out of prison so it’s no surprise he’s struggling.

“But to be ripped away from the only family he’s ever known could be devastating for him – but Marion thinks she’s doing the right thing.”

Actress Susan Cookson, who will be reprising her role as Marion, is currently causing havoc for Victoria Sugden in Emmerdale.

She plays Lee Posner’s mum Wendy and, in a similar storyline, has threatened to get custody of Victoria’s unborn child – despite the baby being a product of Victoria’s violent rape at the hands of Lee.

Do you think David is a good dad? Leave us a comment on our Facebook page @EntertainmentDailyFix and let us know what you think!