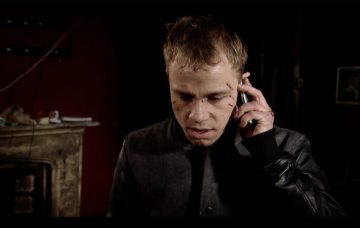 No one in Weatherfield is safe...

Next week’s Coronation Street is action-packed when Shona Ramsey’s killer son, Clayton Hibbs, escapes from prison and ends up holding his own mum hostage.

The drama starts when Billy offers to go to Dane’s funeral with Shona, only for them to arrive and Macca tell them that they’re not welcome.

But soon the fact that her son wants nothing to do with her is the least of Shona’s problems.

Despite the fact Clayton is there surrounded by prison guards, Shona realises her son is up to something when she catches him exchanging dodgy glances with Macca.

And Shona was right to be worried because as the funeral gets underway she’s stunned to see Macca and one of the undertakers attack a prison guard and free Clayton.

As Billy leaps into action he wrestles Macca to the ground, but Clayton manages to make his escape and is soon nowhere to be seen.

But to make matters worse Shona then finds herself being arrested, and David is stunned when he hears what has happened.

Convinced that Clayton is going to come after him and the kids, David orders Sarah to start packing because they have no choice but to leave.

As Nick tells his brother that they can all come and stay at Victoria Court with him, David is thrilled when Shona gets home, relieved that she is safe and the police have let her go.

But the pair are soon fighting when Shona admits she is worried about her son being all alone on the run… scared that he is in danger.

David is incredulous that she is thinking of Clayton when his own kids could also be in danger.

David tells her that he is fuming at the situation and that if he catches up with Clayton before the police do, then he will kill him, leaving Shona devastated.

But this is just the tip of the iceberg… because when David finds out that Shona attempted to smuggle drugs into the prison for her criminal son, he is fuming.

When he then discovers someone broke into their house while they all slept, David sees red and tells Shona to pack her things and get out.

But as she goes to leave, Shona finds herself in grave danger when she gets into David’s car, only for Clayton to jump into the back and order her to drive.

After driving her son to a derelict warehouse, Shona has no choice but to steal money from David’s pot at home and take it to Clayton who has been hiding in the building over night.

As she begs him to hand himself into the police, Clayton refuses and grabs the cash from her.

However as Clayton tries to make a run for it, he quickly realises that the place is surrounded by police and he is trapped.

Meanwhile the police have told David what is happening and he races to the derelict building. As he and Nick are told to stay behind the police cordon, David can do nothing to save his girlfriend as she is lead out of the warehouse by her son with a knife being held to her back.

David is forced to watch on in horror as history starts to repeat itself. Is he about to lose another love of his life at the hands of evil Clayton?

Do you think Clayton is capable of killing his own mum? Leave us a comment on our Facebook page @EntertainmentDailyFix and let us know what you think!