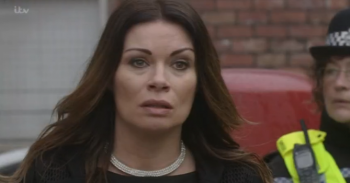 Coronation Street SPOILER: Carla to give Underworld away to her staff?

The fallout from the factory roof collapse continues

The factory for Carla Connor has become almost as synonmous as the cobbles are for Coronation Street.

So the reports that suggest she’s going to just give it away when she returns to the Street are quite a shock given how hard she’s fought to keep it.

Carla has been sectioned and sent to a specialist unit in Carlisle after her psychotic episode in which she saw Hayley Cropper, Rana Habeeb, and Aidan Connor ‘return from the dead’.

While she’s there, Adam Barlow will persuade Carla’s other half, Peter Barlow, to get Carla to put Sarah Platt in charge of the factory.

But it seems when Carla returns, there could be quite the change in ownership when she is said to gift shares in the factory over to its staff.

In a desperate bid to make amends, The Sun has claimed Carla will try to win back the trust of her staff with her very generous action.

A source told the publication: “She returns to Weatherfield terrified of the reaction she will get and is desperate to try and make up for everything that has happened.

“She blames herself for the state the factory is in and takes drastic action to win back the trust of her team.”

And what she does next surprises them all.

“She’s going to hand over her part of Underworld to the workers and turn it into a co-operative,” the insider continued.

“It will mean that machinists like Beth, Sinead and Sally will own a piece of the business they have spent years working in.”

Corrie declined to comment on this story when ED! approached them.

Viewers will know Carla is not really to blame for the factory roof collapse, that claimed the life of Rana Habeeb, at all.

Even though she knew the roof was unstable, it’s been confirmed that Gary Windass was actually the person responsible for it’s ultimate collapse.

He revealed in an answerphone message to ex-girlfriend Sarah that he sabotaged it in order to get the work to fix it, as he needed the money.

Gary managed to delete the message before Sarah heard it and his secret remains safe for now.

But with Carla still blaming herself and trying to make up for all the hurt and pain she’s caused, will his guilt get the better of him eventually and see him come clean?

Carla fought very hard to get control of the factory back after her half-brother, Aidan Connor, left it to Alya Nazir in his will.

Read more: Tina O’Brien admits worries she won’t get through the week

After Aidan donated his kidney to save Carla’s life, she gifted him her half of the factory in return, but she had no idea Aidan had left his shares to Alya, meaning when he took his own life, Alya got everything.

After a bitter battle, Alya eventually sold the factory back to Carla for the price of the original shares.

So now for her to give it away completely means Carla must be really desperate to put things right.

Do you think Carla should give up the factory? Leave us a comment on our Facebook page @EntertainmentDailyFix and let us know what you think!